Brian Kateman is cofounder and president of the Reducetarian Foundation, a non-profit organization dedicated to reducing consumption of meat, eggs, and dairy to create a healthy, sustainable, and compassionate world. His writings have appeared in dozens of media outlets including The Atlantic, Quartz, The Los Angeles Times, The San Francisco Chronicle, The Washington Post, Vox, and The New York Daily News. He is an instructor in the Executive Education Program at the Earth Institute Center for Environmental Sustainability at Columbia University. He lives in New York City with his partner Isabel and rescue dog Tobey.

Pat Crocker is the bestselling author of over twenty cookbooks including The Vegetarian Cook's Bible, The Vegan Cook's Bible, and The Juicing Bible (Firefly Books). Over 1 million copies of her books are in print 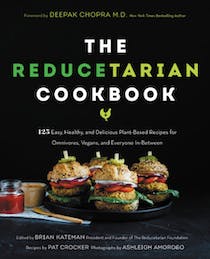 The Reducetarian Cookbook: 125+ Easy, Healthy, and Delicious Plant-Based Recipes for Omnivores, Vegans, and Everyone In-Between