Chris Jones, writer-at-large for Esquire magazine, has won two National Magazine Awards. He is the author of Out of Orbit and Falling Hard: A Rookie's Year in Boxing. His work has also appeared in The Best American Magazine Writing and The Best American Sports Writing anthologies. He lives in Ottawa, Canada. 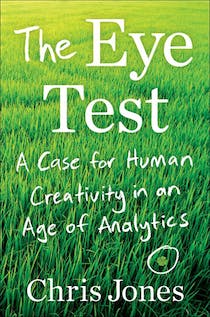 The Eye Test: A Case for Human Creativity in the Age of Analytics