Christina Garcia is a native Texan and University of Texas graduate who has lived in Austin for over a decade. Her writing has appeared in the Austin Chronicle, where she often covers the local music scene.

Austin has a reputation as a well-preserved, ever-changing, but still weird city. Christina loves it most for its lack of pretension. BBQ, Tex-Mex, and soul food are considered fine dining and it's perhaps the only state capital where you can go out in pajamas and feel right at home. 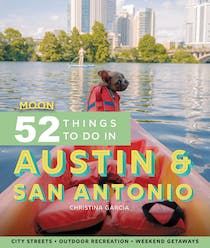