Based in the Nashville area, Colin Escott is one of the world's leading experts on country music history. Among his many accomplishments, he co-wrote and co-produced Hank Williams' "Honky Tonk Blues" for PBS in 2004, and was a series consultant and co-writer for BBC-TV's highly acclaimed series on country music "Lost Highway" (2002).

His music journalism has been published in two volumes, and he has worked with numerous music legends, including Willie Nelson, Elvis Presley, Jerry Lee Lewis, and Johnny Cash. 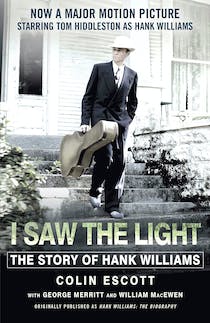 I Saw The Light: The Story of Hank Williams - Now a major motion picture starring Tom Hiddleston as Hank Williams