Brighton born Conor Maynard is 20 years old. Having developed a love of music whilst studying acting, he began recording music in his bedroom in his early teens and at the age of 16, he was recognised by global superstar NeYo. Conor has collaborated with international stars from NeYo and Pharell to Wiley. He has had a number one album, four top ten singles and was awarded the MTV Brand New for 2012 award 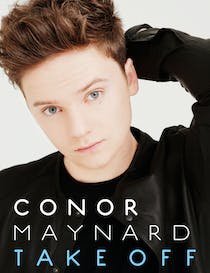 Take Off: The humble beginnings of a Pop sensation