Count Binface is the intergalactic space warrior and novelty politician who has delighted millions with his unlikely tilts at power in the United Kingdom. First he took on Theresa May in the 2017 General Election, cunningly disguised as 'Lord Buckethead', and went viral around the world (in a non-Covid way). Then he challenged Boris Johnson in 2019, when he scored 69 votes (he'd love to say he's the first life form to experience a surprising 69 with the Prime Minister in a sports hall during the small hours, but you just never know). More recently, in 2021 he ran to be Mayor of London in a bid to gain control of the Earth Capital itself. He received a glorious 24,775 votes from the great British public that sent him soaring into ninth place. Binface now has his eye on even more prestigious places in the British establishment, including a guest spot in Dictionary Corner on Countdown (Susie, my DMs are open). 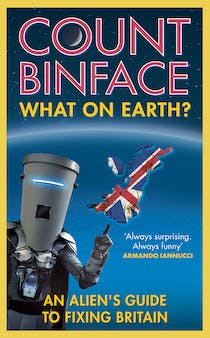 What On Earth?: An alien's guide to fixing Britain