Born in 1986 in Birmingham to an Irish mother and an English father, Dan Martin is the nephew of Irish cycling legend Stephen Roche.

Dan's racing showed bravery and suffering in every way: his body couldn't lie. The good vibes he sent through the peloton were rewarded by a Most Aggressive Rider prize at the 2018 Tour de France, where he took his trophy on the final podium on the Champs-Elysees.

In his free time, Dan wrote a monthly column in Europe's greatest cycling magazine, Procycling, over an unusually long period, from 2008 to 2021. He shared some of his views on a cyclist's life but his most significant stories and strong opinions have been held back for this book.

Dan is a proud husband of Jess, a British long-distance runner who competed in the 2016 Olympics, in Rio, and a proud father of twin daughters, Ella and Daisy, born in September 2018.

Retired from the pro peloton since the end of 2021, Dan is now an active investor in growth and start-up companies as a Partner of Rubix Ventures Inc. and he is building plans to keep a close eye on cycling, especially on young riders that he would like to guide, advise and share his positive energy. 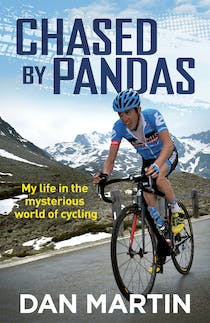 Chased By Pandas: My life in the mysterious world of cycling