Daniel Taylor grew up watching Nottingham Forest from the terraces of the City Ground before moving into the pressbox, and is currently the chief football writer for the Guardian and the Observer. This is his fourth book and his second on his specialist subject - Clough and Forest. Taylor grew up in Nottinghamshire and started his career at the Newark Advertiser. He was appointed by the Guardian in 2000 and now lives in Manchester.

Jonny Owen was born and bred in Wales' most famous footballing town, Merthyr Tydfil. As well as acting in some of the UK's biggest TV shows and writing and starting in the Universal movie Svengali, he's also written about football for the Guardian, The Times and the the Western Mail. A little slower than he once was, he still trots out for a local five-a-side team and is currently working and living in Nottingham and London. 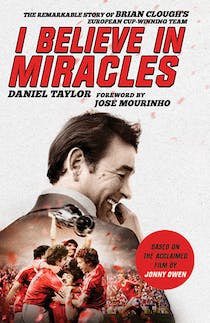 I Believe In Miracles: The Remarkable Story of Brian Clough's European Cup-winning Team