Danny Lyon has long been considered one of the most original and influential documentary photographers. He pioneered the style of photographic New Journalism as he rebelled against Life magazine style photographs, instead immersing himself as a participant with his documented subjects. He produced his major bodies of work in this way: living with the Chicago outlaw motorcycle club for The Bikeriders, immersing himself in the Texas prison system for Conversations with the Dead. Since this work in the early 1960s and 1970s, Lyon has produced numerous highly collectible photobooks, mounted solo exhibitions at The Whitney Museum of American Art, The Art Institute of Chicago, The Corcoran Gallery in Washington DC, and won two Guggenheim Fellowships, a Rockefeller Fellowship, and ten National Endowment for the Arts awards. Lyon is the father of four children and divides his time between New York State and the state of New Mexico. 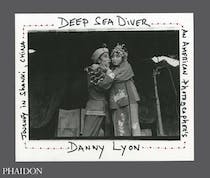