DAVID EWING DUNCAN is the author of nine books, including the international bestseller Calendar, and writes for Wired, Discover, and the Atlantic Monthly. He is a freelance producer and correspondent for ABC's Nightline, and a commentator on NPR's Journalist, author and researcher David Ewing Duncan has covered the intersection of technology and humanity for Wired, Vanity Fair, the New York Times, Atlantic, Fortune, NPR, ABC News and many others. He is the author of nine books, which have been translated into over twenty languages, including the international bestseller The Calendar, and Experimental Man. In 2003, he won the Magazine Journalism Award from the American Association for the Advancement of Science. He is the founding director of the Center for Life Science Policy at UC Berkeley. He lives in San Francisco, California and Boston, Massachusetts.
www.davidewingduncan.com 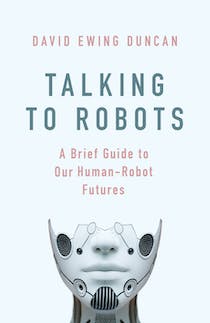 Talking to Robots: A Brief Guide to Our Human-Robot Futures