Ethan Chorin is a former diplomat, senior political analyst, author, and environmental entrepreneur. From 2004 to 2006, he was one of a handful of US diplomats posted to Libya to help set up a US mission in the wake of the rapprochement with Colonel Gaddafi. Six years later, as co-director of an NGO working to help build medical infrastructure in Eastern Libya, he became a witness to the Benghazi attack and its aftermath. A year later, he was nominated by both Sen. Dianne Feinstein and Sen. John McCain to succeed Stevens as ambassador. From 2020-2021, he was Sr. Advisor to the Minister of State for Foreign Affairs of the UAE. A widely respected expert on Libya, Chorin is the author of Exit the Colonel: The Hidden History of the Libyan Revolution and Translating Libya: In Search of the Libyan Short Story. His work on Libya, the Middle East, and Iran has appeared in the New York Times, the Financial Times, Foreign Affairs, Foreign Policy, Prospect, Forbes, Newsweek, and others. He has been a regular commentator on Libya for the BBC, and has also appeared on CNBC, CNN, CBS, and C-SPAN. Chorin holds a PhD in Agriculture and Resource Economics and an MA in Economic History from UC Berkeley, a Master s in International Policy Studies from Stanford, and a BA from Yale with distinction in Near Eastern Languages and Literatures. He has been a Fulbright Scholar (Jordan) and Fulbright-Hays fellow (Yemen), and he has held fellow and senior fellow positions at the Center for Strategic and International Studies, the Yale School of Management, and the Dubai School of Government. He lives in the New York area. 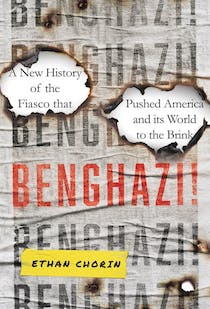 Benghazi!: A New History of the Fiasco that Pushed America and its World to the Brink