Royston Weeks was born in Dagenham and ran away as quickly as possible. He attended the Slade School of Art and in 1966 became Director of the Pretentious Gallery, Soho. He has been a noted TV art critic since the early 1980s, presenting acclaimed series including Splat! How To Comprehend Incomprehensible Art (1986) and All Balls - A Critic's Guide to Contemporary Art Criticism (1993). 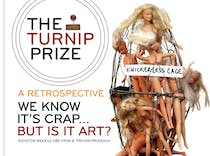 The Turnip Prize: A Retrospective: We know it's crap... but is it art?