Gavin Thurston is an award-winning cameraman specialising in wildlife. He has worked on 17 of Sir David Attenborough's series and has travelled and filmed on all seven continents and at both North and South poles. Recently, whilst filming for Blue Planet 2 he was in the submersible that set the world record for deepest dive in Antarctica. He has survived charging elephants, being hunted by lions, close encounters with a grizzly bear mum, wild wolves, plane crashes, civil wars, and coups. And once, whilst filming for a BBC special on Gorillas, he was slapped by a silverback.

Gavin has won numerous awards including 5 EMMYs, 3 BAFTAs and a Royal Humane Society Award for Bravery. 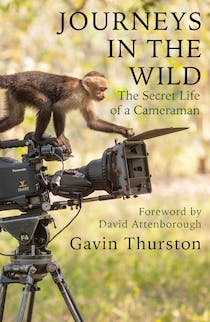 Journeys in the Wild: The Secret Life of a Cameraman