George Carlin (1937-2008), a celebrated stand-up comedian, actor, social critic and author, was best known for his irreverent, dark comedy and reflections on American society. Carlin was once dubbed "the dean of counterculture comedians" and has been regarded as one of the most influential stand-up comics of his time. He filmed his first HBO special in 1977 and appeared on "The Tonight Show" over 130 times. The documentary will feature a unique mix of conversations with Carlin's family and friends, material from his stand-up specials, TV appearances and personal archive.

Lewis Black is the hugely popular and New York Times bestselling author, stand-up comedian, actor, and playwright. Besides appearing regularly on The Daily Show (in his own segment, "Back in Black"), he has written and starred in a string of successful HBO and Comedy Central specials and one-man Broadway shows. He's won a Grammy, an Emmy, and an American Comedy Award. Born near Washington, D.C., Black graduated from the University of North Carolina at Chapel Hill, and has a master's degree from the Yale School of Drama. 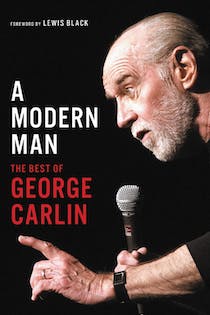 A Modern Man: The Best of George Carlin

When Will Jesus Bring the Pork Chops?