GILBERT MELVILLE GROSVENOR is the former president and chairman of the National Geographic Society, after having served as the editor of National Geographic magazine from 1970 to 1980. The great-grandson of Alexander Graham Bell and the third Grosvenor to serve as editor-in-chief of the magazine, Gilbert Grosvenor has received 14 honorary doctorates and the Presidential Medal of Freedom in 2005 for his leadership in geography education. 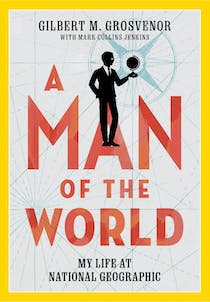 A Man of the World