Food journalist and podcaster Gilly Smith was an early adopter in British food podcasting, and was nominated for a Fortnum and Mason award in 2017 for the delicious. podcast. She is the producer and presenter of Cooking the Books with Gilly Smith, the delicious. podcast, Leon's How to Eat to Save the Planet, The Borough Market Podcast and The Write Songs. She produces The Food Foundation's Right2Food podcast and Philip Lymbery's The Big Table podcast for Compassion in World Farming.

Initially a radio and TV producer, she has written seventeen books, mainly about the influence of culture of food in its various forms, as well as articles for the national press and academic journals, largely about food, philosophy and ethical travel. Smith's Taste and the TV Chef (2020) won the UK Gourmand Award for Food Writing. 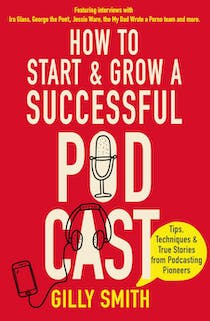 How to Start and Grow a Successful Podcast: Tips, Techniques and True Stories from Podcasting Pioneers