Gina Schock has been playing in rock bands since the age of thirteen, and she's been the drummer of the Go-Go's for over four decades. In addition to her work as a drummer, guitarist, and producer, Gina has co-written songs for Miley Cyrus and Selena Gomez. She has also co-written songs with Alanis Morissette and Carnie and Wendy Wilson of Wilson Phillips. 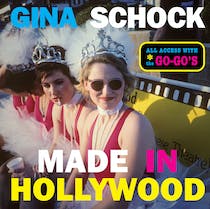 Made In Hollywood: All Access with the Go-Go s