GLENN T. STANTON is the director of Family Formation Studies at Focus on the Family. He debates and lectures extensively on the issues of gender, sexuality, marriage and parenting at universities and churches around the world.Stanton also served the George W. Bush administration for many years as a consultant on increasing fatherhood involvement in the Head Start program. Stanton is the author of eight books on marriage and families and a regular columnist for various blogs. He is also the co-writer of 'Irreplaceable' a film seen in theatres nationwide, and the co-author and creator of 'The Family Project,' a 12-session small group DVD curriculum produced by Focus on the Family. Stanton earned bachelor's degrees in communication, arts, and religion, and a master's degree in philosophy, history and religion from the University of West Florida. 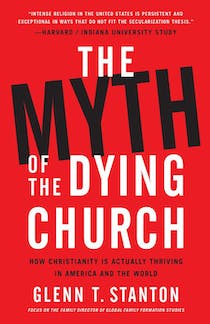 The Myth of the Dying Church: How Christianity Is Actually Thriving in America and the World