Lynda enjoyed a career spanning forty-five years. Her roles covered drama as Helen Herriott in All Creatures Great and Small and comedy in her own series Faith in the Future, which won Best Comedy in 1998. She also managed to give us a twirl in Strictly Come Dancing and plenty of lip as a Loose Woman for six years. She created the role of Chris in the stage version of Calendar Girls and after a successful run in the West End went on to spend four years playing to full houses in a nationwide tour and she is still loved and remembered as the long-suffering mum in the OXO commercials. Lynda had previously written Lost and Found which was a Sunday Times bestseller and she enjoyed bestselling success with her fiction writing too. Her real life family brought her great joy and she lived in north London with her youngest son, Robert, and her stepson Bradley, while her eldest son Michael lived just round the corner. She finally found true happiness with her husband Michael Pattemore and they were married in 2008 on her sixtieth birthday. Lynda sadly lost her battle with cancer in October 2014. 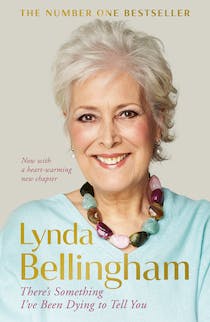 There's Something I've Been Dying to Tell You: The uplifting bestseller