Ross Mathews grew up in Mount Vernon, WA. He began his television career on The Tonight Show with Jay Leno in 2001 where he remains as a correspondent. Additionally, he is a regular roundtable comic and occasional guest-host on E!'s Chelsea Lately, as well as a red carpet staple on E!. He resides in Los Angeles and Palm Springs with his partner, Salvador, and their two teeny tiny perfect puppies. To learn more, check out HelloRoss.com, Facebook.com/officialrossfanpage, and Twitter @helloross. 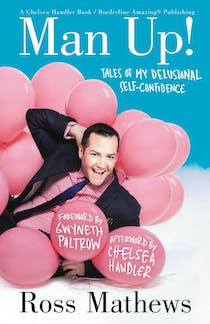 Man Up!: Tales of My Delusional Self-Confidence