Ryan Angulo was born and raised in Rhode Island, where he attended the Culinary Arts Program at Johnson & Wales University. Ryan has traveled throughout the US, working at restaurants in Rhode Island, California, Atlanta, New Orleans, Hawaii, and New York. In 2008, he opened Buttermilk Channel with Doug Crowell, and serves as its executive chef. In 2014 he opened French Louis as chef and co-owner. His take on American cuisine has been featured in the New York Times, Bon Appetit, Time Out New York, Food & Wine, and on the Food Network. Doug Crowell is a native New Yorker and a graduate of the Culinary Institute of America. He worked in the kitchens at a number of restaurants in Boston and New York, including Picholine and La Grenouille, before moving to the front-of-house to run several of Manhattan's largest and most popular dining rooms. In 2008 he opened Buttermilk Channel and followed by French Louie in 2014. 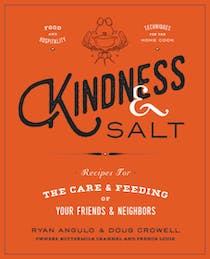 Kindness & Salt: Recipes for the Care and Feeding of Your Friends and Neighbors