In the vein of Laura Griffin and Karen Robards, THE BURIED is the second book in Shelley Coriell's gritty and dark Apostles series.

Secrets from the past.
Voices from the grave.
Because nothing stays buried forever...

Cypress Bend, Florida, is a small southern bayou town filled with long-buried secrets. It's also the home of successful, fiercely independent state prosecutor GRACE COURTMANCHE who's pulled into a world of terror and self-doubt when she receives a phone call from a young woman buried alive. In a race to stop a revenge-seeking killer, Grace unearths skeletons from her past along with feelings for the one man she swore she'd never need again, THEODORE 'HATCH' HATCHER, a rootless, smooth-talking FBI crisis negotiator who's back in Cypress Bend to deal with a secret of his own. 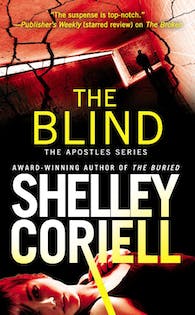 Praise for The Buried