Shlomo Avineri is a renowned Israeli political theorist and public intellectual. He is Professor of Political Science at the Hebrew University of Jerusalem and member of the Israel Academy of Sciences and Humanities. He served as Director-General of Israel's Ministry of Foreign Affairs under Prime Minister Yitzhak Rabin.
His books, which have been translated into many languages, include The Social and Political Thought of Karl Marx, Hegel's Theory of the Modern State, Moses Hess: Prophet of Communism and Zionism and The Making of Modern Zionism. He held visiting appointments at, among others, Yale, Cornell, University of California, Oxford, the Central European University in Budapest as well as the Brookings Institution and the Carnegie Endowment for International Peace. He is the recipient of the Israel Prize, the country's highest civilian decoration. He translated Marx's EARLY WRITINGS into Hebrew and wrote the historical Introduction to the 3-volume Hebrew edition of Herzl's DIARIES.
Haim Watzman has translated and edited many important Israeli books by some of the country's leading journalists, scholars and writers - among them David Grossman, Tom Segev and Amos Oz. His fiction and essays appear regularly in his 'Necessary Stories' column in The Jerusalem Report. He is also the author of two books of his own: Company C: An American's Life as a Citizen-Soldier in Israel and A Crack in the Earth: A Journey Up Israel's Rift Valley, and is currently completing the manuscript of a collection of short stories about the Israeli army. He lives in Jerusalem with his wife, Ilana. His website is http://southjerusalem.com. 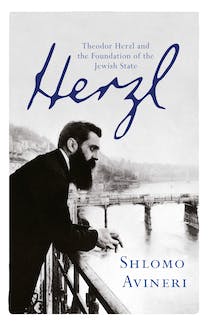 Herzl: Theodor Herzl and the Foundation of the Jewish State