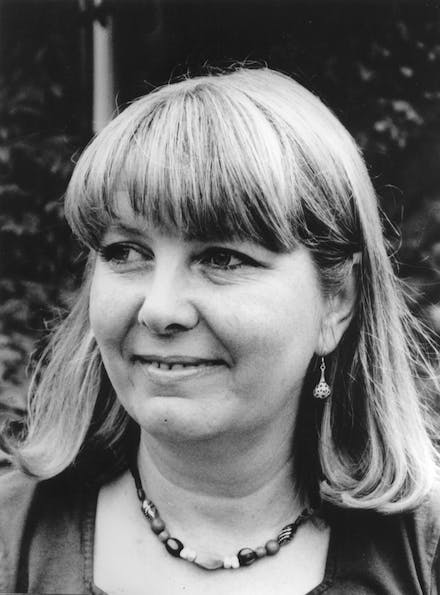 Theresa, the daughter of a vicar, grew up in North Yorkshire and Cleveland, moving house quite often. She originally wanted to be a graphic designer but, after two years at Kingston Upon Hull College of Art, Theresa realised it wasn't for her and trained to be a primary teacher instead. After five years of teaching she gave up work to look after her own three children. Theresa began to write simple picture book stories to entertain her children and as the children got older, the stories got longer. With all her spare time taking up with writing, Theresa determined to get something published. Success came in 1987 with the publication of her first book and since then Theresa has become a fulltime writer. Her inspiration comes from the local history of her childhood, the 'turn of the century' photographs of Whitby by Frank Meadow Sutcliffe and the industrial history of Sheffield.

Theresa has been twice nominated for the Carnegie Medal, for Riding the Waves (Walker) and Meet Me by the Steelman (Walker).

Theresa lives in Sheffield with her husband, who is an architect, her two sons and her cat, Mewsli. When she isn't writing, she is reading and studying historical texts and Theresa enjoys this research for her books almost as much as the writing itself. Theresa greatly admires resilience in a person and loves writing about people who had hard lives. She believes that a knowledge of the history of ordinary people can inspire the children who read her books, helping them with their own struggles and decisions.

In amongst all this reading and writing, Theresa amazingly finds time for a spot of painting, drawing and dancing.