Tyrese Gibson-known to his legions of fans as 'Tyrese' - is an American multi-media entertainer who has been hugely successful as a multi-platinum and Grammy-nominated R&B singer, songwriter, rapper, actor and fashion model. Born and raised in the gritty South Central L.A. section of Watts, Tyrese was discovered at the age of fourteen when he won a local talent show. His performance in a 1995 Coke commercial, singing the phrase 'Always Coca-Cola,' led to worldwide recognition and a longstanding music career. After releasing several award-winning albums, he transitioned into films, first with John Singleton's critically acclaimed Baby Boy, followed by some of Hollywood's biggest movies, including 2 Fast 2 Furious, Four Brothers and Michael Bay's Transformers. Tyrese created the bestselling comic book Mayhem and produced the television show First In. He is currently working on his sixth studio album. 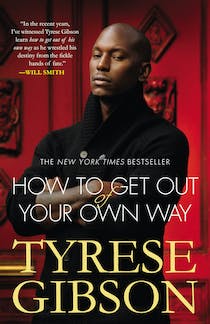 How To Get Out Of Your Own Way