CARRIE MILLER is an American-born, New Zealand-based travel writer. She has spent her career riding reindeer in Mongolia and diving with great white sharks in Australia, among other adventures. A contributing editor for National Geographic Traveler, Miller has also been published in Afar and Travel + Leisure, among others. She lives with her husband, a dive master, in Lake Hawea, New Zealand.
BRIAN SKERRY (foreword) is a photojournalist specializing in marine wildlife and underwater environments. Since 1998 he has been a contract photographer for National Geographic magazine, covering a wide range of subjects and stories. He was named the Rolex National Geographic Explorer of the Year in 2017. His work has appeared in People, Sports Illustrated, U.S. News & World Report, Smithsonian, and Esquire, among other publications. The author/photographer of Shark, published in 2017, lives in Uxbridge, Massachusetts.

A Diver's Guide to the World 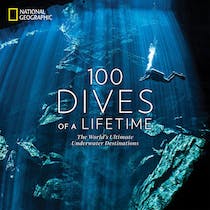