Cynthia Erivo is a Tony, Emmy, and Grammy Award winning actress who burst onto West End and Broadway stages in The Color Purple and has taken the big screen by storm. In 2019, Erivo starred in her first leading role in Harriet, which garnered unanimous critical acclaim for bringing the legacy of abolitionist Harriet Tubman to life. Upcoming projects include the HBO series The Outsider and National Geographic's Genius series Aretha, as well as Chaos Walking, Needle in a Timestack, and Rip Van Winkle. A UK native, Erivo graduated from the famed Royal Academy of Dramatic Art in 2010.

Charnelle Pinkney Barlow was born and raised in Poughkeepsie, New York. Growing up, she was surrounded by art daily. Her passion for illustration grew after being introduced to the wonderful world of watercolor. She received her BFA in Illustration from the University of the Arts in Philadelphia, Pennsylvania, and her MFA in Illustration as Visual Essay from the School of Visual Arts in New York City. Creating images and stories that speak to the hearts of children and those that guide them is her greatest joy. Charnelle currently lives in Indianapolis, Indiana. 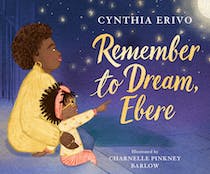