Duncan Weldon is a writer and broadcaster. He was previously the Britain Economics Correspondent at the Economist, the Economics Correspondent for Newsnight, the BBC's flagship nightly current affairs show and a columnist for Prospect magazine. He has written and presented several documentaries for BBC Radio 4, including World War Two: The Economic Battle. An economist by background, he began his career at the Bank of England, before working in asset management and then public policy as the senior economist at the Trades Union Congress. Aside from The Economist and Prospect he has written for the Financial Times, New Statesman, Guardian, Political Quarterly and City AM, and is a regular commentator on television and radio.
He writes the Value Added newsletter at Substack.
You can find him on Twitter at @DuncanWeldon 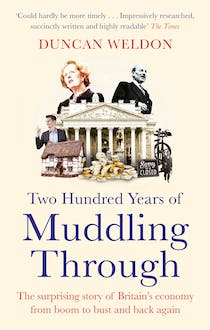 Two Hundred Years of Muddling Through: The surprising story of Britain's economy from boom to bust and back again