ROGER LUCKHURST is a writer, teacher and editor who specialises in Gothic and science fiction literature and film. He is the editor of The Cambridge Companion to Dracula and the Oxford World's Classics edition of Dracula.

ADAM SIMPSON has contributed to major exhibitions around the world. He is the illustrator of the best-selling World of Shakespeare jigsaw puzzle, also by Laurence King. 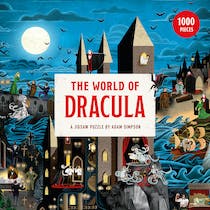 The World of Dracula: A Jigsaw Puzzle by Adam Simpson