Traudl Junge was a brewer's daughter born in 1920 in Munich. From the end of 1942 until April 1945 she was Hitler's private secretary. In 1942 she married one of Hitler's staff, Hans Junge who was killed a year later. After the war she was sent to a Russian prison camp and later returned to Germany to work as a secretary and a sub-editor.
She died on February 10th, 2002 shortly after publication of her book. 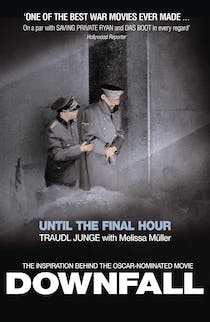