Deep Space: Beyond the Solar System to the End of the Universe and the Beginning of Time

Govert Schilling explores the mysteries of space that lie beyond our solar system on this mind-bending trip to nebulae, galaxies, black holes, and the edge of the observable universe.Join Govert Schilling on a journey across the universe that will ignite the imagination. The trip begins inside our own solar system with a brief tour of the sun, the planets and their moons, asteroids, comets, and dwarf planets. We then accelerate into deep space, traveling from our interstellar neighborhood, through our own galaxy, the Milky Way, to the far reaches of the cosmos.With Schilling as our guide, we explore the birth of stars and stellar nurseries, such as the Orion and Carina Nebulae; the death of stars, from red giants to catastrophic supernova explosions; and galaxies and galaxy clusters beyond our own including spiral galaxies, elliptical galaxies, and lenticular galaxies. We learn about supermassive black holes, which astronomers now believe exist at the center of every galaxy including our own, and exoplanets, billions of which are believed to be orbiting stars in the Milky Way and beyond. The book concludes at the edge of the cosmological horizon with a look at dark matter, dark energy, and theories of extraterrestrial life and the Multiverse.Including hundreds of photographs and custom illustrations, as well as a star atlas that shows the full celestial sky, Deep Space is the perfect book for astronomy buffs, students, and anyone fascinated with the mystery and beauty of the cosmos. 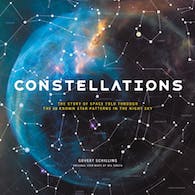 Constellations: The Story of Space Told Through the 88 Known Star Patterns in the Night Sky