And here we go, we’re approaching the halfway point of Altered Carbon with episode five of ten. What better way to celebrate than to begin the episode with a blonde woman in a white dress. We know this woman – it’s murder victim Mary Lou Henchy. Mary Lou looks practically angelic amongst the clouds. We get a glimpse of her final moments with the 1%ers who spend their time at Head in the Clouds. These final moments are both horrific and exquisitely shot. The recurring image of Mary Lou crashing into a river has become something of a statement from the showrunners about Altered Carbon’s emphasis on the aesthetic of the violent world they’ve created.

We leave this grim scene for another; the trusty old, abandoned warehouse. It looks like Kovacs has taken the wrong message from his torture in the previous episode and is indulging in a little torture himself – twist: Ortega is on the scene (when is she not?) and calms the situation right down. DOUBLE TWIST: This is a flashback of Ortega and her lover/partner Ryker, the man whose body Kovacs now inhabits as a sleeve. Ryker is desperate to solve the murder of Henchy.

A huge piece of the puzzle has fallen into place. Ortega’s been hounding Kovacs this whole time to protect the body (and oh what a body it is) of the man she loves. Finally the whole Sam and Dianne with a neo noir twist makes sense. Kovacs and Ortega are both convinced that the murder of Laurens Bancroft and Ryker’s investigation are somehow connected. The only way to find out is to interrogate the man whose murder Kovacs is trying to solve. Altered Carbon serving up yet another layer of intrigue.

Kovacs brings his usual charm to the Bancroft residence by breaking and entering and assaulting some staff. The breaking and entering is mentioned but isn’t actually shown onscreen. Are we finally seeing some restraint? Short answer: no. Miriam Bancroft, the OG blonde in white, makes her play and offers to buy Kovacs out of his deal with Laurens. If the money wasn’t enough she’s also offering him a part in what has to be her unofficial Star Wars porn parody: Attack of the (sex) Clones. Miriam believes her husband killed himself. Like most monstrous men, Laurens is controlled by fear –perhaps even driven to suicide because of it. He’s afraid of change and keeps his family “trapped in a state of benevolence” she says.

Kovacs confronts Laurens over the move to put him Ryker’s body. But any high ground he has is lost thanks to some expert bullshit on Laurens’ part. The meeting takes place at a shelter for bioweapon victims. Within a few seconds of skin-to-skin contact your own body begins to decay. As Laurens has an unlimited supply of bodies this isn’t exactly a problem for him. But it sure as hell makes him look like a saint. This is some Lex Luthor level public relations manipulation. Impressive. “This isn’t sacrifice, it’s theatre,” says Kovacs. “I give them something to believe in,” says Laurens.

Running out of options, Kovacs returns home and Hemingway proves that he’s pretty much just here for exposition and plot development: he’s learned that Laurens was at Fight Drome the night he was killed. Fight Drome is an off-the-books site, where bare knuckle fights to the death for sport take place. Sadly no Tina Turner though.

Kovacs and Ortega confront the owner, Carnage, played by scene-stealer Matt Frewer. They come across two amazing things in Fight Drome. First, Kovacs finds a clone of his original body that’s been used in combat at Fight Drome - this is some truly existential you know what. But an even greater twist is yet to come. Fight Drome’s recordings are all on VCR because they’re totally unhackable and totally a nostalgic delight.  If you don’t know what a VCR is, you’re too young to be watching this show. 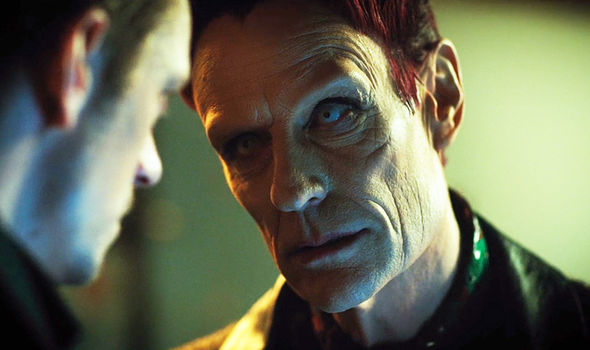 They discover a very high Laurens not only watched but took part in some of that sweet, sweet blood sport. His opponent? His own son Isaac. A benevolent father indeed.

The pair break into Isaac’s pad and make a shocking discovery: Isaac has been using clones of Laurens without his father’s consent to broker deals. As Miriam said, Laurnes is trying to keep his family in line by refusing to let his children live in bodies that are as mature as their sleeves. This is all a bit overwhelming and both Kovacs and Ortega seem to agree. The only way to get to the bottom of this: sex.

After their tryst, we get a flashback of Ryker’s arrest for the murder of a CTAC; suffice to say Kovacs is a more pleasant man than Ortega’s love. Following Ryker’s arrest we return to the present as Ortega and Kovacs tenuously link Ryker’s framing, the murder of Bancroft and a series of murders of people who converted faith and reject resleeving, like the case of Mary Lou Henchy. It’s all a bit contrived but when Kovacs and Ortega are both naked, you don’t really seem to notice.

The one person connecting all these elements is Dimmi the Second, the man who tortured Kovacs in episode four. Luckily Ortega has him resleeved (illegally) at the cop shop. Unfortunately their interrogation is cut short by Ortega’s boss, Tanaka. Ortega is able to convince him for one more shot but Kovacs is to get the hell out of there.

What follows has to be the best piece of action to date in Altered Carbon. Ortega and Abboud in a fight for their lives in an elevator against Dimmi and one of his allies disguised as a cop. It’s brutal, frenetic and tightly shot. You can feel just how claustrophobic it is in this lift. The screen is humming as the action escalates; it’s an almost hypnotic effect. Ortega is literally ripped to shreds by a horrific version of Batman’s grapple hook that latches onto flesh instead of buildings. Seemingly down for the count, Dimmi’s ally takes his shot at Ortega, only for Abboud to dive in front of her. The bullet, of course, goes right through his sleeve. Abboud isn’t just dead, he’s dead dead. Out of bullets, the criminals flee. Leaving Ortega fighting for her life. 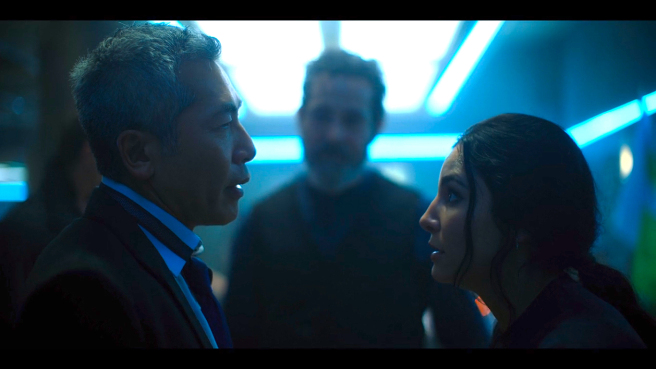 Shit is getting real in episode six. The violence is hyper, the twists are epic and the cliff-hangers make you give thanks to the technological gods that binge watching exists (having to wait an entire week for your next hit would have been infuriating).

Beyond all this, the real strength of the show—like the book — are the questions it throws up around life and death, on what it truly means to be a human being. That and the unbelievable fight sequences.

In this episode, we get both. In spades. And we also get a light shone on the grand conspiracy that in the first episode was in its infancy. Now it’s all grown up.

The person pulling the strings is a man named Hemingway, who is also has access to the same ‘after-life’ technology that Bancroft uses. Hemingway’s fingers are in a lot of pies and it appears that he is responsible for most of the scumbags that have been sent to off Kovacs.

But hey, this is a recap. So let’s do just that.

The last episode finished with Ortega picking up a fatal(ish) wound and this episode opens with Kovacs trying to save her, playing one-man paramedic van with aplomb.

He rushes into the hospital with her and while Ortega is getting stitched up a shattered Kovacs is having an imaginary chat with his mentor and lover, Falconer. She mentions how expendable people are, but Kovacs has grown attached to Ortega. He’s not going to let another perso die. Vernon interrupts Kovacs’ chat just in time for Kovacs to go to Isaac’s house to further the investigation into the murder for which he was resleeved in the first place. 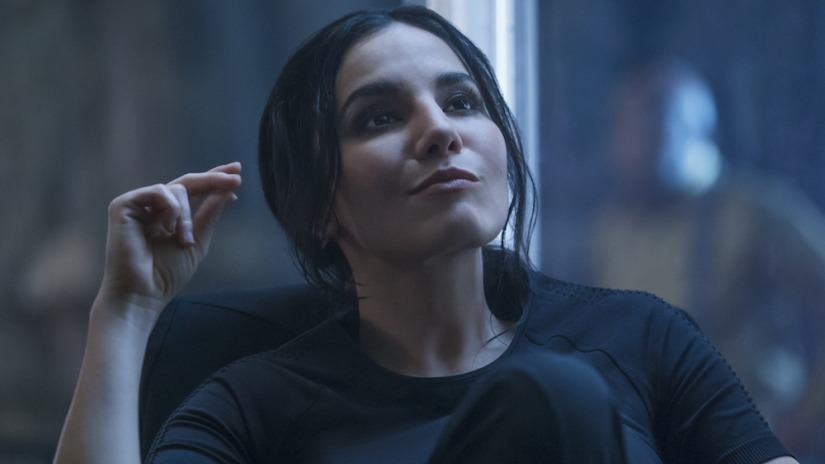 Meanwhile, the quietly sketchy Captain Tanaka has a showdown with Prescott, the high-powered attorney of the Bancroft family. Prescott wants the clone of Laurens Bancroft taken from Isaac’s apartment. It becomes clear that the captain is a bit powerless, though. We also learn that the Ghost Walker, the crazed assassin who nearly killed Ortega, is on none of the footage of the attack. Ghost Walker by name…

We see crack assassin Dimi with Hemingway, who tells him not to touch Kovacs. Hemingway needs him alive but won’t say why. Dimi’s gutted, but acquiesces. He’ll find out why soon enough. In the meantime he really ramps it up a notch, needle-casting himself into a new clone: the body of the original Takeshi Kovacs we saw at Fight Drome. Oh boy.

Over at Isaac’s apartment our heroes bust open and give him what for, but he has no idea what they’re talking about. It feels like Isaac is being set up, but by who? After a terse back-and-forth with Papa, it’s clear that he just has a jumbo meal of Daddy issues. And self-esteem issues. And anger issues. Just… a lot of issues, full stop. But he’s not a dad-killer. ‘I don’t want you dead, Dad,’ Isaac says. ‘I want your respect.’ Yikes.

In the hospital, Ortega wakes up from her surgery with a rad new arm. But she’s not happy about it (I would love a bionic arm, FYI), or the death of Abboud. As Kovacs and Ortega talk it out, they realise that Tanaka is a bit sketchy (I’ve been trying to tell you this through the monitor), and Ortega uses her new arm to put a few dents in the wall with his body. Yeah bionic arm.

Tanaka admits to taking a few credits to give people information. As the team circles on one contact via VR, hoping it’s the elusive Hemingway, their cover is blown and Hemingway evades them yet again. So what happened to Dimi, you ask? Oh he’s been waiting. And our heroes are in trouble. As they come to after their VR adventures, they are kidnapped, put in chains, and sent into the Fight Drome to battle each other. It’s intense and some extraordinary direction and Rob Zombie tracks make this one of the most iconic scenes of the show so far. After battling a series of very disagreeable mutants, the crowd descends on them. There’s no escape. This is it. Altered Carbon is over. The next few episodes will just be white noise and bionic arms. There’s no way they can get out of—

Suddenly, a shadowy figure jumps in, slicing and shooting and killing everything in sight. 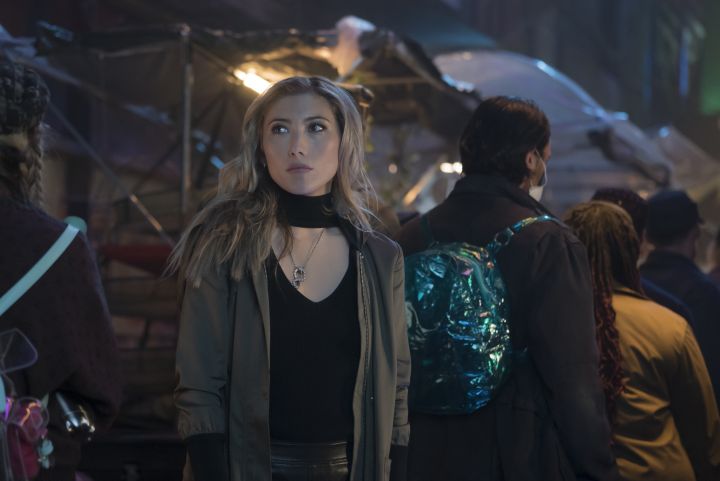