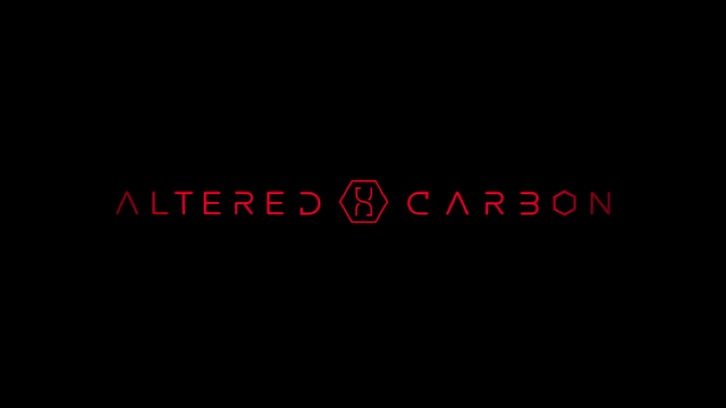 This is the penultimate episode and we start to find out why Bancroft died and more about Rei. It starts off with Kovacs meeting with Rei telling her he is over everything, he doesn’t care and he is going to leave earth. She tries to convince him otherwise, but he leaves. Rei sends the Ghost Walker to follow him and we see him getting into a limousine with Miriam and head off to her private island. At this point you are probably thinking wwwhhhaaaaat???

But then we jump back 18 hours with Kovacs trying desperately to contact Ortega or Vernon . . . because he knows what really happened to Bancroft. The Elliot’s are off having dinner. We then see Ortega come into The Raven wounded. Kovacs helps her into the room, puts her in the bath and binds her wounds, but she is asking odd questions and acting a bit weird and while talking with her he figures out that it’s actually Rei wearing Ortega’s sleeve. They argue and Rei says that Ortega cost her a lot of money and she going to destroy everything Kovacs cares about. She says ‘Blood is owed.’

Rei is going to take that blood payment from everyone related to Kristin Ortega. We see the Ghost Walker go to their house and kill everyone, including Ortega’s mother and the children. He also destroys their stacks so there is no chance that they can be re-sleeved. It is brutal and over the top but shows you what depth Rei will go to for revenge.

Kovacs is too late to stop the massacre so he finds Vernon and Ava and gets them back to The Raven when Micky shows up worried about Ortega and wanting to help. Kovacs takes Micky’s ID and tells them all to get out of town.

Kovacs uses a 3D printer to clone himself and makes a duplicate stack so now we have two Kovacs. Hence one hopping into the limo with Miriam. The two Kovacs’ try to play Rock Paper Scissors to see who stays behind and who goes to Head in the Clouds but apparently you can’t win a Rock Paper Scissors competition with your clone.

As expected no one leaves. They work out a plan to get into Head in the Clouds, with Vernon posing as a General in the club, he discovers he has bought the right to mutilate and torture and permanently kill a 19-year-old girl who believes she will be re-sleeved. Vernon is furious as he sees the parity between this girl and his daughter, Lizzie. This starts to give us a hint to what happened to Mary Lou, the girl who fell from the sky. The second part of the plan is to infect Rei’s backup with a virus so she only has one life. Kovacs will then try to get her to confess to everything.

Meanwhile, Vernon drugs the girl, gets access for Micky and Ava into the computer so they can place the virus. It is all taking too long so Kovacs, who is hiding in the boot of the car, doses himself with the drug reaper, which will allow him to get in without setting off the alarms. Vernon is then offered another woman, man or child to do with what he wants but kills a few guards and a host, who owed Rei a favour, then goes to help Kovacs get to Rei in time to corrupt her back-up.

Kovacs starts to get a confession from Rei where basically she admits to having Miriam administer stallion to Bancroft, which was administered by Miriam who owed Rei a favour. It makes him lose control and he kills a girl permanently. Mary Lou witnessed this and made a run for it while being chased by Rei. Instead of being captured she throws herself off the Head in the Clouds, hoping her stack will be found and she will be re-sleeved. Rei did this so she could blackmail Bancroft to stop the 653 bill, which would allow the police to re-sleeve murder victims even if they’re religious. This would put her business at risk. So in the end, Laurens Bancroft did, in fact, kill himself because he couldn’t face what he had done. Not sure if that makes him an ethical person, considering all the other things he did, but it does show he had the capacity to feel some guilt.

At this point guards flood into the room and Vernon and Kovacs find themselves surrounded. The one big question that is still unanswered? What will happen with Lizzie now that Poe has made her into a killing machine?

Now we just need to know how it ends. Bring on episode 10.

Ortega is trapped in VR, Kovacs and Vernon are still on Head in the Clouds and you just know that there are going to be fireworks.

The episode opens with Ortega discovering her family has been murdered and she is killed by the Ghost Walker. This of course is still in VR, and the scene is repeated over and over again as part of her torture.

Back in the real world Reileen’s guards have surrounded Kovacs and Vernon. Rei is threatening to kill everyone Kovacs cares while he is forced to watch. It’s safe to say, she has well and truly gone off the deep end.

We then go back to Bay City where the Ghost Walker is intent on collecting the rest of Kovacs’s crew. At The Raven, Poe can’t seem to get the turrets to work and the Ghost Walker uses an ‘electron destabiliser’ to ‘kill’ him. Mickey has his stack shot out so he is dead for good. Lizzie is ‘sent to Head in the Clouds and we see Poe disintegrate before your eyes. Poe tries to save Lizzie before they get their hands on her too. Instead of running she wants to be sent to Head in the Clouds

Lizzie is transported into a synthetic sleeve, which she alters into a Catwoman lookalike. She puts her newly learned fighting skills to good use; the first guard she comes across is quickly dispatched.

Kovacs manages to pull Ortega out of VR and Rei tells him to choose who dies first. Kovacs holds a gun to his throat and pulls the trigger, but Rei gave him an unloaded weapon. He is desperate to save his friends so he offers to stay if she’ll let them go.

Cut to Lizzie as she comes across the sickos who kill sex workers for their pleasure and she carves them up to show them how it feels. Lizzie goes to save her parents and Ortega, and now you see how her deadly skills have been honed. I’m not sure how her mum feels about her daughters’ unrestrained violence.

Lizzie frees Ortega and she goes back to save Kovacs. The fight now splits in two. T Kovacs vs R Kovacs and Ortega vs the Ghost Walker. While that is going on the rest of the Kovacs crew are trying to crash the entire ship. They manage to cut the power and the ship starts plummeting to the ground. The fight is still going on. Rei and Kovacs are pretty closely matched but Ortega is getting her ass kicked by the Ghost Walker. She then remembers she has a bionic arm and she goes all Jaime Sommers (younger readers may need to Google this reference) on him and manages to kill the Ghost Walker and destroy his stack. Rei and Kovacs stab each other at the same time. There is a bit of staring into each other’s eyes with hurt looks at this point. Like how could you? No how could you? And so on.

Now Rei plays her trump card. She tells Kovacs that she backed up Quell before she blew up the shuttle. He is tempted not to kill his sister, he grabs the gun off Rei and points it at her stack. He can’t seem to pull the trigger until she tells him that she will never stop. So bye bye Rei. Finally.

The ship starts really starts to go down now, so Kovacs says goodbye to Ortega but stays with Rei as the ship goes down and crashes into the bay. 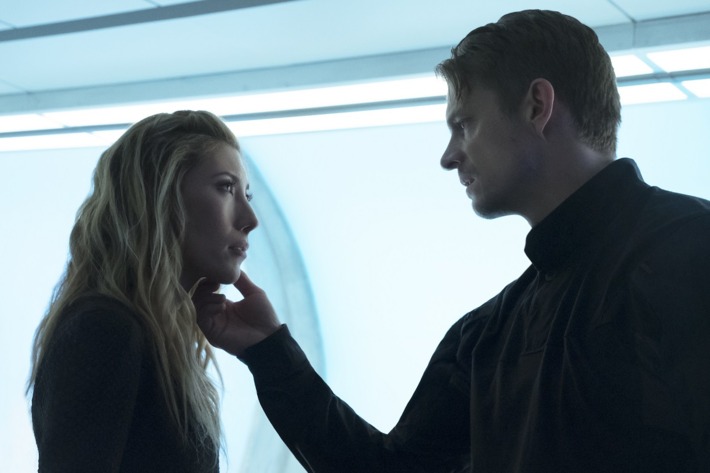 We do however know that Kovacs was double-sleeved, and they also manage to save his stack from the crash. It’s illegal to have two sleeves with the same stack so one has to go. Which one does he keep? The sleeve who killed his sister or the one who got jiggy with Miriam? You find out when Kovacs tells Ortega that he is the one that said goodbye to her.

Kovacs and Ortega head off to the Bancroft mansion, reveal Rei’s confession, tell Laurens that he real-deathed a girl, and did top himself because of the shame. I wonder if he did that to forget the murder? He knew he was backed up so he only loses that bit of his memory. We learn that Lizzie was pregnant to Laurens but when she came for help Miriam beat her so badly that she lost the baby and is sent to the Wei Clinic, which is what almost destroyed her. The bad guys and gals get their comeuppance, the Elliots get Ava’s sleeve back and play happy families, Ryker gets his sleeve back too and Kovacs heads out to find Quell’s stack so true everlasting love can be reunited. A bit neat and tidy but good all the same.

It will be interesting to see where they take the series from here. Is it just Kovacs hunting for Quell? Is Rei really not backed up somewhere? Only time will tell.