I’ve been reading fantasy for a long time now - more than twenty years – so when I was asked to come up with my five ‘all-time’ favourites, I knew straight away that it wasn’t going to be an easy task. Not only is there a considerable breadth of titles to choose from, but in some cases, the books I was passionate about in my younger years aren’t always going to be the masterpieces I remember. My tastes have changed, my understanding of what is good writing and good storytelling and a good book have changed. I’m a little more jaded and I’ve started needing to see deeper characters, more complex plots, more meaningful stakes. It is, simply put, harder to keep me engaged.

So I’m starting with a minor caveat: the older books I’m about to mention, while doubtless ones that I would still enjoy, wouldn’t necessarily make this list if I read them for the first time today. But. They are the ones I remember being blown away by at various points in my life. These are the books that changed what I look for in other books - the ones that have stuck in my mind, that have influenced me as a writer, that I’ll still remember plots and characters and specific scenes from even if I haven’t read them in the past decade. They’re not necessarily the best I’ve ever read, but they are undoubtedly the ones that I look back on most fondly.

So, with that out of the road and in no particular order: my five favourite SFF books of all time: 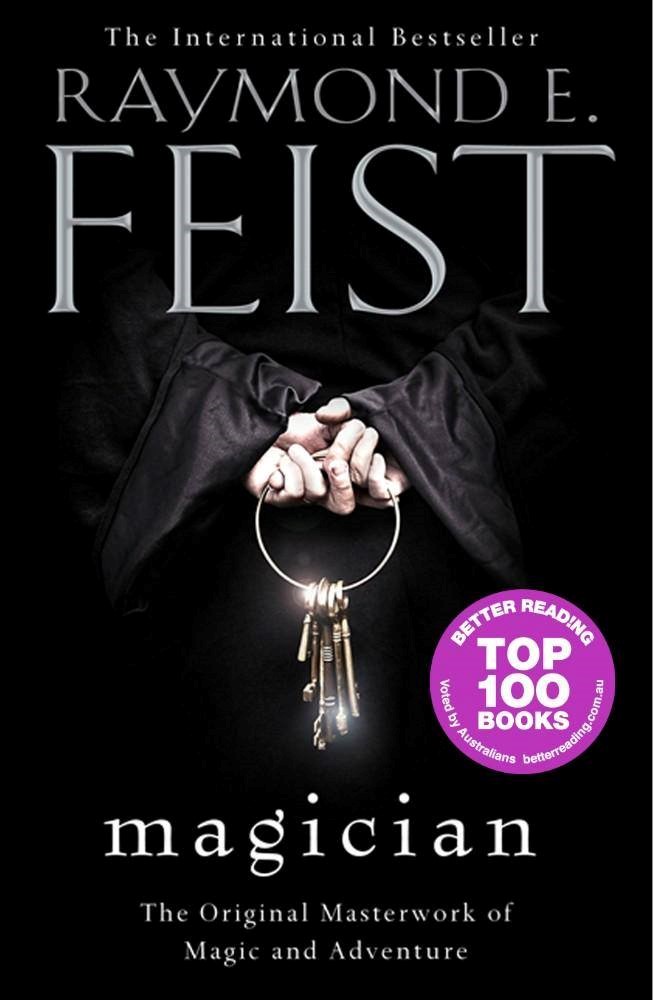 In my early teens, I wasn’t really into fantasy. I was a voracious reader and I’d enjoyed Narnia and a few other children’s fantasy books, but was never especially motivated to go and try any of the more ‘serious’-looking series.

That all changed when I was 14, and I got all but badgered by a school friend into reading Raymond E. Feist’s Magician. I wasn’t sure what to expect, but what I got was a massive book with a plot that spanned two very different worlds. A cool coming-of-age story. An action-packed adventure. Epic stakes. Characters I could root for.

As you can probably guess from its presence on this list, I loved it.

2. The Eye of the World - Robert Jordan My own book is often described as having clear The Wheel of Time influences, and it’s for very good reason: Robert Jordan’s epic series was the fantasy series when I was a teenager. It was the one everyone had read, and so it was the one we all discussed and debated and theorised and argued over. And while it’s hard to talk about The Eye of the World as a novel separate from the series, it’s the book that drew me (and everyone else) into the amazing world Robert Jordan created, so it seems the logical one to include here.

It’s also a book that I recently re-read - an experience which is the primary reason for my disclaimer at the beginning of this post. After finishing, I realised that not as much happened in The Eye of the World as I’d originally thought. The prose was more description-heavy than I remembered, which occasionally slowed down the pace beyond what I now tend to enjoy. At times, too, the female characters wore on me a little more than I think they used to.

Fortunately, those things don’t stop it from being great. It’s a book that starts out relatively small and personal, but you still immediately get the sense of how vast and interesting and complex and deep the world is. What’s more, knowing what’s coming later in the series, you can see the groundwork being laid for storylines that won’t come to fruition until five, six, seven books down the track. It brilliantly sets up a world that has a truly epic scope, not to mention a fascinating history that’s actually integral to the plot, rather than just acting as window dressing for the story. Flawed or not, I think it remains a must-read for anyone who’s even vaguely interested in epic fantasy.

I still remember reading Stephen Lawhead’s book – the entire Song of Albion series, actually – and it being the first time I felt genuinely, emotionally gut-punched by something that happened in a story.  That doesn’t sound like a recommendation, but it absolutely is. Until I started The Paradise War, most of what I’d read had been solidly in the ‘adventure’ category: stories with plenty of peril but that always presented a very direct kind of danger, with the threat usually being one of physical harm to the heroes or the world in general. In those books, too, when the heroes faltered, they always managed to pick themselves back up again and make things right. Even when they suffered, you knew that as long as they triumphed in the end, it would all be worthwhile.

The Paradise War was a new kind of story to me: one in which the hero could experience loss that was deep, personal, and irreparable. As a reader, the book was suddenly no longer just about ploughing on in the hope that the good guys won and the bad guys lost, because not everything could be fixed by the right side winning anymore. Something truly tragic had happened to a character you were rooting for, and now even if they managed to save the world, it would never be more than a bittersweet victory. It was poignant.

Stephen Lawhead is one of the rare writers, I think, who manages to balance heroic fantasy with this sort of thing almost perfectly. He’s not interested in constantly killing off characters just for shock value, which is cheap and easy to do, nor is he interested in simply glorying in the grimmer aspects of a story. Instead, he uses tragedy and loss – sparingly, I might add, albeit to great effect - to make a more impactful, absorbing, thoughtful narrative. The entire book is elevated as a result.

It’s hard to imagine these days, but there’s a good chance I would never have tried Mistborn if I hadn’t recognised it as being written by ‘that guy finishing The Wheel of Time’. I was in my late twenties, and I’d been through quite a reading drought – enough so that I was starting to drift away from fantasy as a genre. The Final Empire changed that.

It ran against a lot of my expectations when it came to epic fantasy. It used a ‘hard’ magic system that gave the characters clear, logical limitations. It had clean, stripped-down prose. It was fast-paced, packing more story into one book than half the trilogies I’d previously read. Importantly, though, it also still retained the things I loved about fantasy. It had fun, heroic characters, a cool world, an intriguing story, dark moments, and great action sequences. It was a blast to read, and I finished both it and its sequels in a matter of a few days.

In terms of its place on this list, I actually had a hard time choosing between The Final Empire and Brandon Sanderson’s even-more-epic The Way of Kings. To be honest, I think that the latter is actually the better book… but Mistborn will always be the one that had the most impact on me, not only reviving my interest in fantasy but renewing my enthusiasm for writing my own story. Because of that, it’s the one that gets the spot.

5. The Name of the Wind - Patrick Rothfuss

A silence of three parts. I could leave it at that, and I think a lot of people would get it.

There are some who I’m sure will disagree, but to me at least, Patrick Rothfuss’ prose is special. The Name of the Wind’s words clicked with me from the prologue onward in a way that no other book had before, nor has since. Beautiful, emotive prose is hard to do well, but managing it in such a way that it also tells a story well – that makes it functional as well as poetic, where every word counts and where the plot that it’s tied to is consistently engaging - is verging on the miraculous.

So much so, in fact, that The Name of the Wind is the only time I’ve ever seen it attempted and actually enjoyed it. Even taking that away, though, The Name of the Wind was just a story that worked for me. It was a joy to read from beginning to end, and along with Brandon Sanderson’s body of work, it’s now my go-to recommendation for anyone looking for a great fantasy book.

James Islington is the author of THE SHADOW OF WHAT WAS LOST. He was born and raised in southern Victoria, Australia. An avid fantasy reader for many years, it was only when he read Brandon Sanderson's Mistborn series that he was finally inspired to write something of his own.

5 SFF books that changed me - Jessica

Realm team member and Designated Nerd of the Publicity Department Jessica Skipper shares the five SFF books that changed her.

One of the founding members of The Realm, Sean Cotcher, writes about his top 5 SFF reads.

5 SFF Books That Changed Me - Justin

Joint MD of Hachette Australia Books and team member of our SFF community, The Realm!