Post-apocalyptic and dystopian fiction is a broad genre that often sets a protagonist in the aftermath of a disaster (environmental, political, physical or otherwise) in which society as we know it has collapsed and the conditions of day-to-day life are bleak and/or oppressive for the majority of people. This extreme setting allows the distillation of our needs and wants to intensely explore what is at the core of humanity and society.

If you like post-apocalyptic for the intrepid hero in an epic (often political) narrative, then you might want to check out our EPIC FANTASY list; if you’re reading for imaginings of a future world then you could check out the CYBERPUNK recs; or if you’re more into the terrifying landscapes and creatures in a dystopian world, you should check out our HORROR list. You can see them all here in our Realm Infographic!

My personal bent is toward the epic so I’m focusing mostly on some of the bigger – literally – titles of the genre. 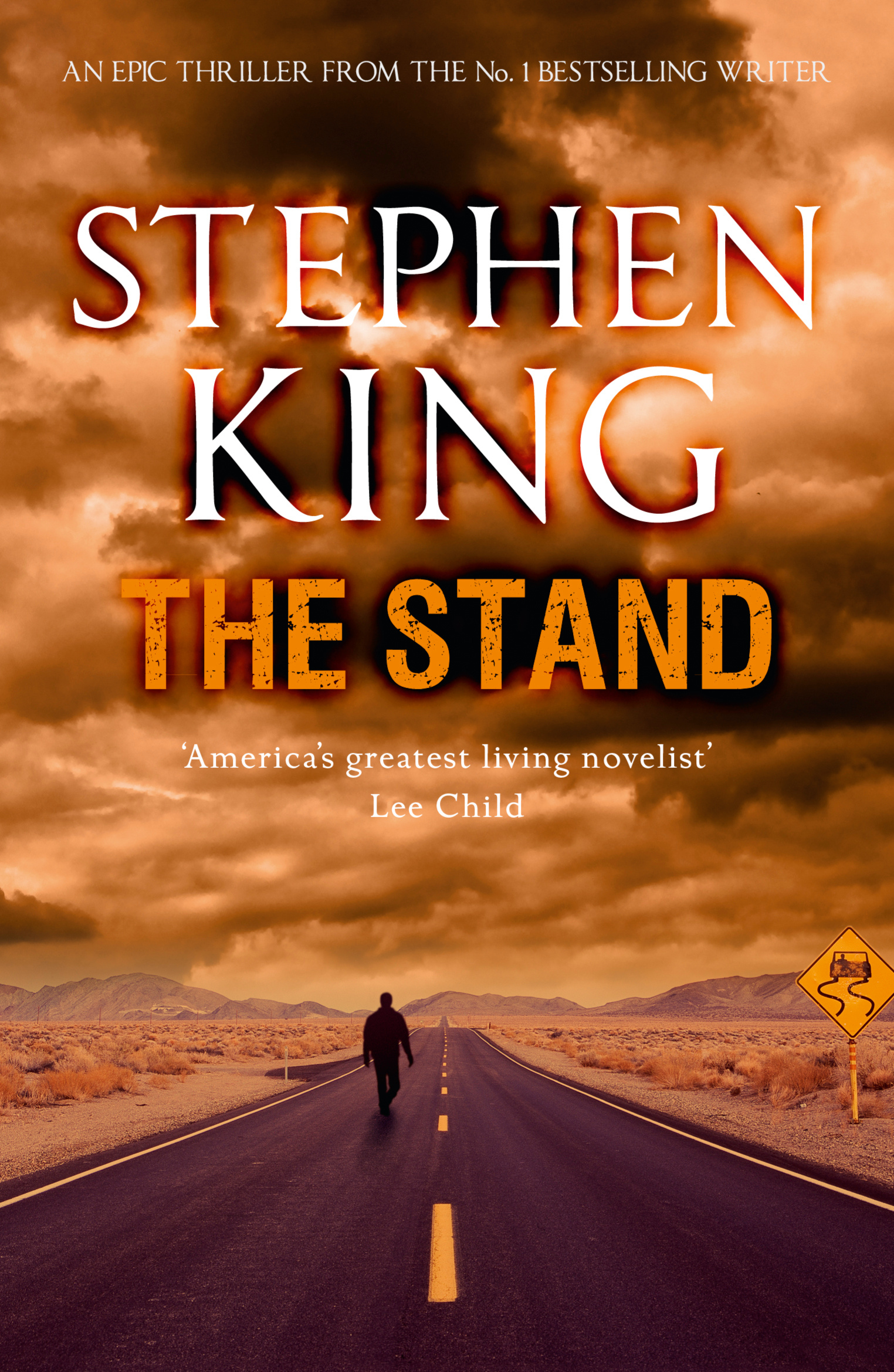 First came the days of the plague. Then came the dreams.
Dark dreams that warned of the coming of the dark man. His time is at hand. His empire grows in the west and the Apocalypse looms.

The Stand begins in a world known to us, and we follow a cast of characters as that all falls apart in the wake of a supervirus that kills the majority of the population and as the man in black rises. The dark man draws his followers to the west, and the remaining survivors slowly come together to withstand his second apocalypse (as if one wasn’t enough, give them a break!).

A classic of the genre, it is an exploration of the atrocities we perpetrate against one another when resources are scarce and any clear social structure is abandoned, but also of the possibility for good in such a world, and the internal war between those two forces in the everyday.

The extended edition (a mere 1440 pages) gives you so much time with these characters – and this is why I love the epic – you journey with them for so long that their motivations and behaviours are incredibly fleshed out, their triumphs feel as though they are your own, and their deaths hit so hard when they do (inevitably) come.

The Stand is a special kind of horrifying. Its lingering terror comes from its total plausibility. One of the most interesting parts of the book is a collection of vignettes quite early in the piece that show snapshots of how the survivors try to cope with a world devoid of the mechanisms upon which they have relied their whole lives. The survivors who can’t survive.

My edition also has illustrations (by the fantastic Bernie Wrightson) that have haunted me since first viewing. 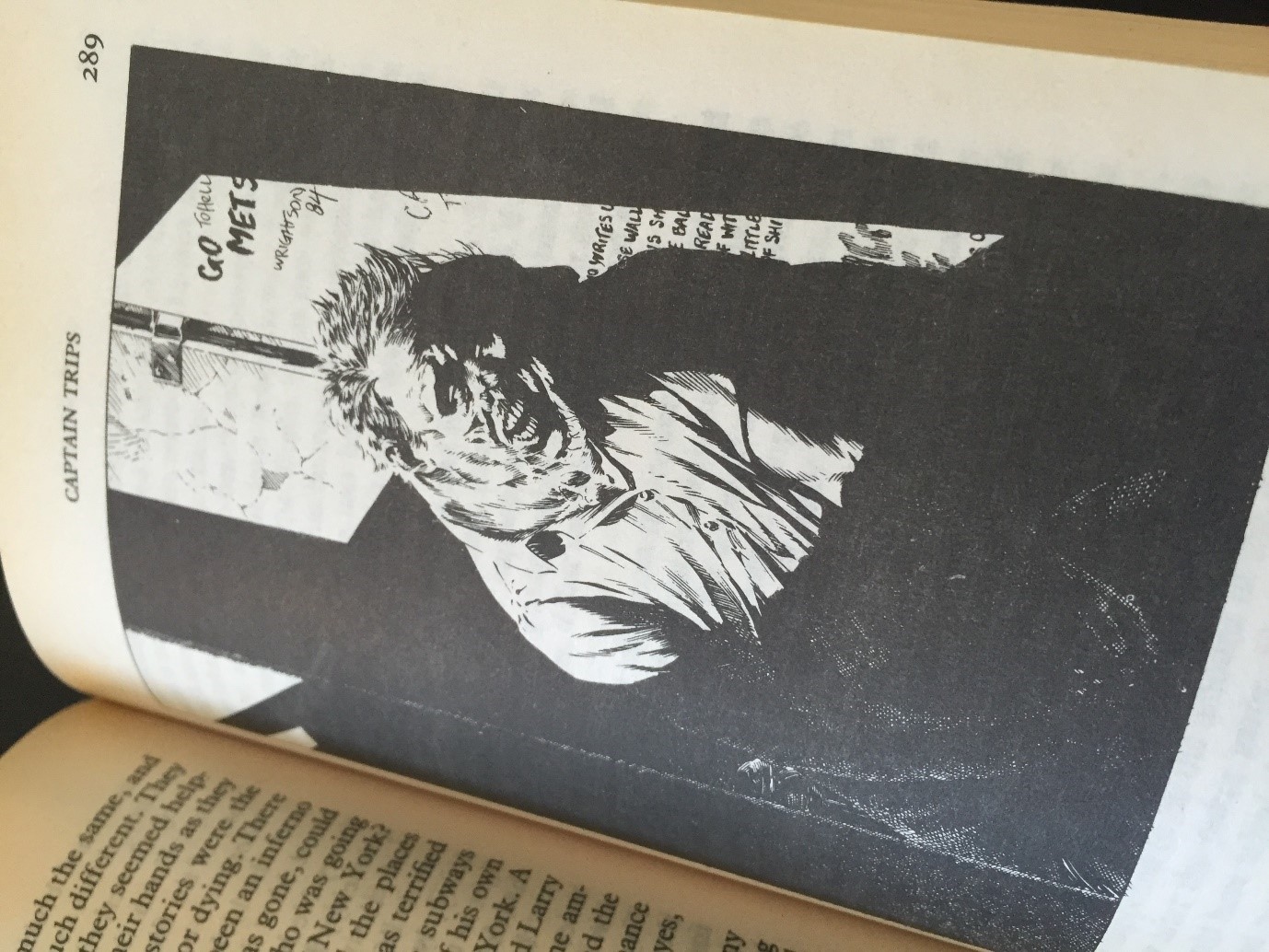 I re-read this book every few years. Each time I am on the edge of my seat. Each time I am terrified of that dark tunnel and joyful for Mother Abagail and disappointed by . . . actually, I don’t want to spoil it for you!

The Stand is the benchmark against which I measure other post-apocalyptic books...and it’s a hard mark to meet.

TLDR: Epic in scope; a terrifying villain; believable, relatable characters; genuinely scary in parts – there’s a reason this one is a classic!

It happened fast. Thirty-two minutes for one world to die, another to be born.

Cronin’s epic trilogy spans the before, the during and the after of an apocalypse in which a highly-contagious virus rapidly infects the population and transforms them into vampire-like creatures that hunt the uninfected for food. (I obviously have a bias –just like The Stand, we see the accidental release of an experimental virus from a government lab in a top-secret facility that quickly devastates the population.)

Edge of your seat stuff, Cronin’s trilogy is 2382 pages all up, but if you don’t have time in your life for all three books, I highly recommend the first, The Passage. It is a stunning self-contained story that spans about one hundred years after the dust has settled and the survivors have adapted to this new landscape.

Cronin introduces a broad collection of characters and deftly moves between perspectives, but he allows enough time so that the reader doesn’t feel disoriented. I became very close to some of these characters, and their arcs across the trilogy are incredible. Cronin plants seeds very early on that bloom into amazing (read: awful/triumphant/terrifying/heart-wrenching) events much later on.

Cronin has the skill of making the reader feel very in the moment, which only amplifies the looming tension and heightens the violence in the action sequences. The vampire-like creatures don’t feel too familiar, even to the reader who is well-versed in this genre, and they are genuinely terrifying.

The overall effect is mesmerising, you fall into the book so easily that before you know it, it’s 4am and you have to get up for work in two hours.

Plus - Cronin is a big Star Trek fan, so we love him even more.

Nobody knew where the virus came from. FOX News said it had been set loose by ISIS, using spores that had been invented by the Russians in the 1980s. And while every TV station debated the cause, the world burnt.

Harper leads a pretty happy, if boring, life with her husband – but when a fast-spreading virus causes people to violently burst into flames and literally sets the country on fire, Harper has to find a way to survive. Then she discovers that she’s pregnant.

Then she discovers that she has the virus.

What I love about The Fireman (and why I read all 768 pages in 3 days) was the way that it didn’t try to tell a hundred stories over a thousand years as many of the massive tomes of dystopia do, sometimes well, sometimes not so well. The Fireman follows just one protagonist – a caring, stoic, delightfully-sweary school nurse – and through her eyes these impossibly huge concepts (it’s the end of the world as we know it) in a very personal way. And I also loved the science behind the virus, nicknamed Dragonscale, which manifests as beautiful lines and artwork of black and gold on the skin and which burns and smokes in a fascinating response to brain chemistry.

The Fireman has everything you want from this genre: a novel virus with enough scientific explanation to suspend disbelief; madness in the common man as a result of catastrophic violence; the politics of small communities thrust together in the wake of a disaster, struggling to survive; and (best of all) spontaneous human combustion.

I have feelings about the ending of this one – talk to me once you’ve read it!

TLDR: Great concept that develops well, tense action with enough happy moments to keep you going. I challenge you to take longer than a week to read this.

The Girl With All The Gifts – M. R. Carey 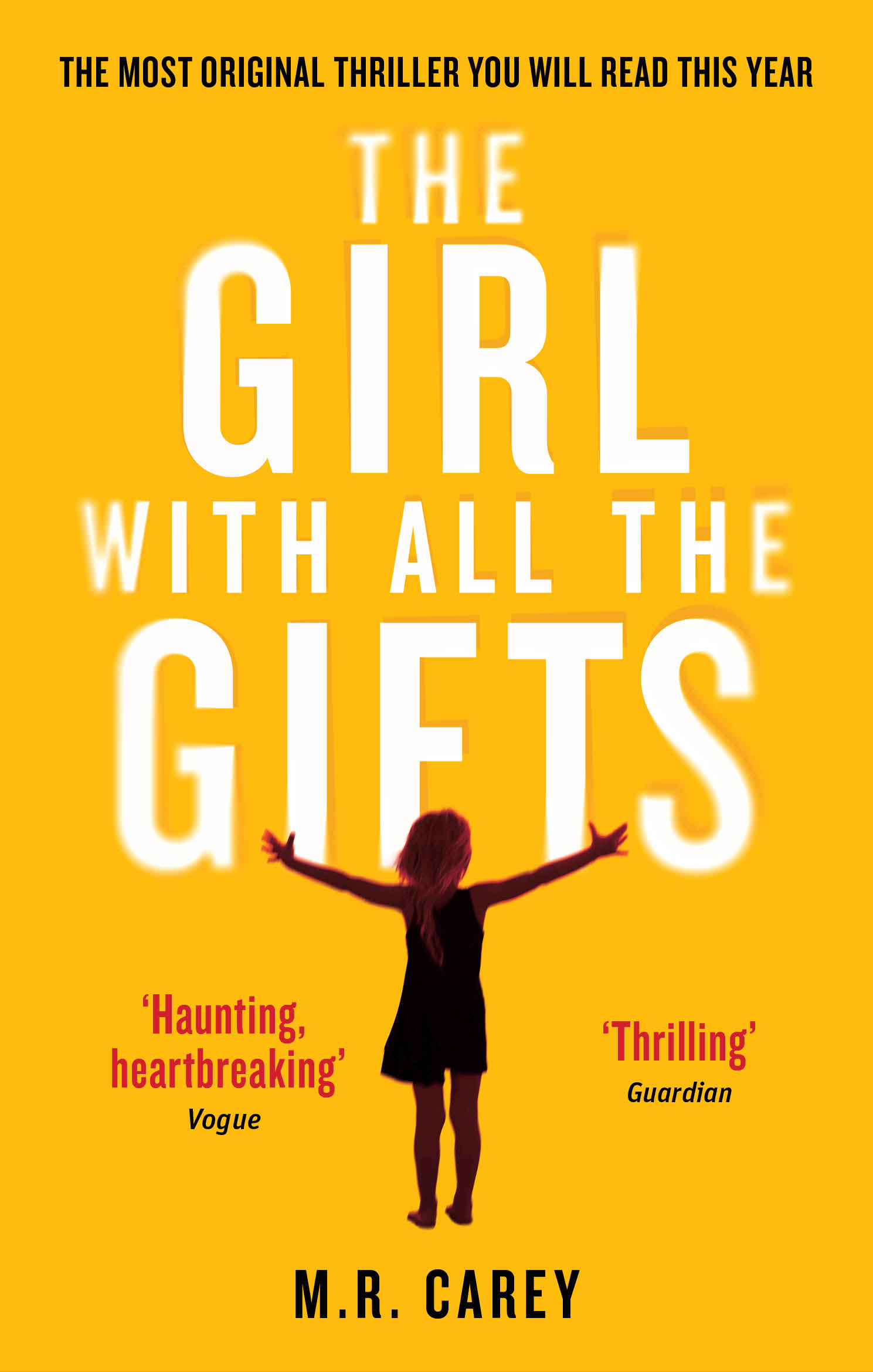 Every morning, Melanie waits in her cell to be collected for class.
When they come for her, Sergeant Parks keeps his gun pointing at her while two of his people strap her into the wheelchair. She thinks they don't like her. She jokes that she won't bite. But they don't laugh.
Melanie is a very special girl.

Okay, so you don’t have time to read only massive epics, I hear you: I’ve included a book that’s not a million pages long. Although, yes, a zombie book, The Girl with all the Gifts is quite introspective, and very character-driven – but that doesn’t mean there’s not the classic heightened, creepy suspense and gorey violence to satisfy your hunger (gross).

The world-building is effortlessly done and I’m loath to say much more about the plot, as the revelation of what exactly is going on here is what makes the first act so memorable. I will say that the science is strong, detailed but not laborious, and key to the ethical questions at the heart of the novel.

M. R. Carey began in graphic novels, notably working on Lucifer and X-Men: Legacy, before writing The Girl with all the Gifts in 2014 and you can see how this has influenced his storytelling, with a filmic quality to his writing (pro tip: check out the movie adaptation from last year).

And good news is Carey has just returned to this world in The Boy on the Bridge, so if a standalone isn’t enough, we’ve got what you need.

TLDR: Not your typical zombie book; creepy science and pacey action make this one a must-read. 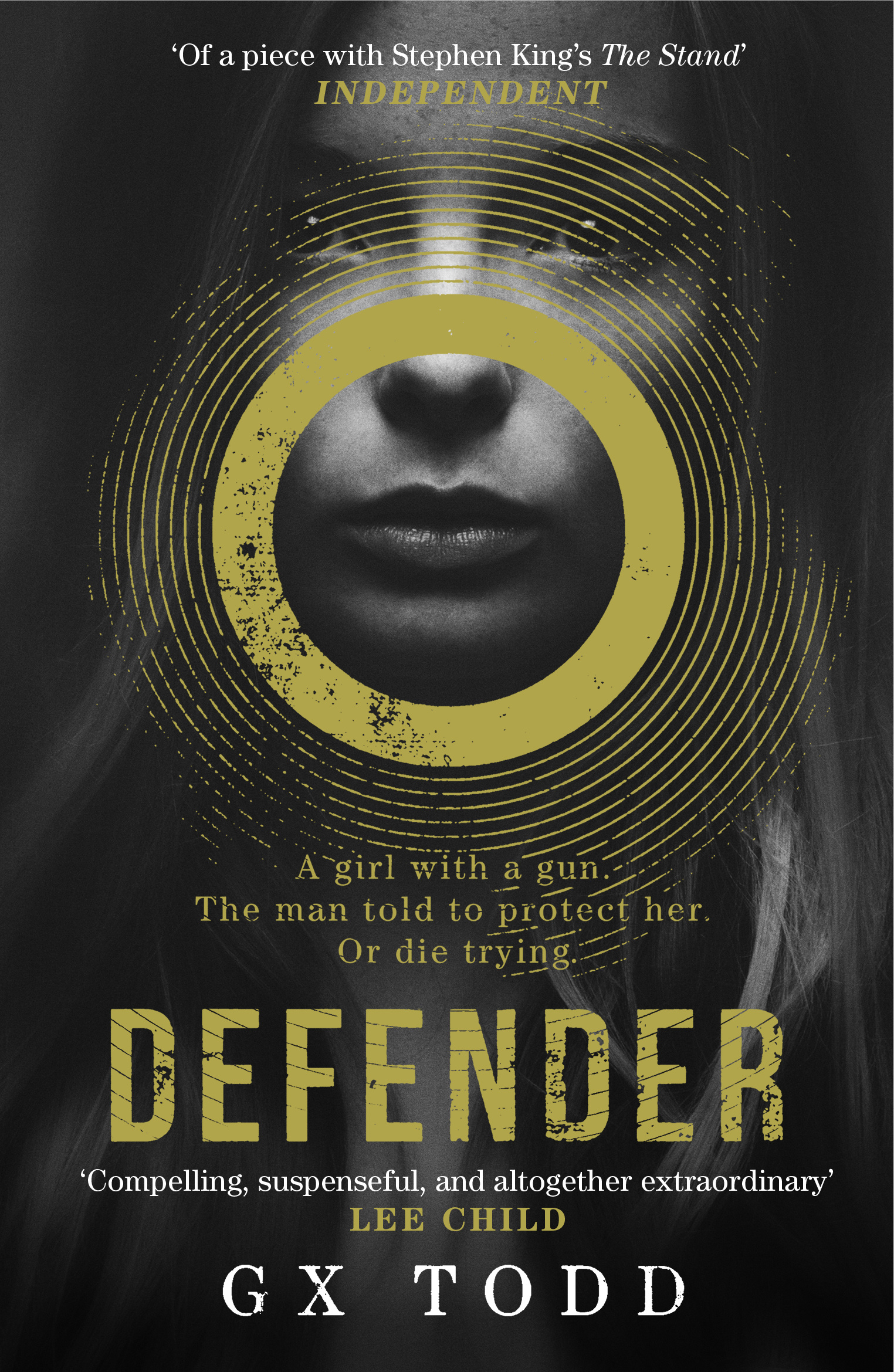 What if the voice in your head didn’t belong to you?

G X Todd has come up with a fantastic premise that lives up to the hype: there are voices in your head that don’t belong to you, and listening to them can be dangerous.

In Defender you are plunged into a post-apocalyptic landscape with little explanation, but that’s okay, you don’t need to actually see the apocalypse to enjoy this thrill ride of a book. The world-building is fantastic; Todd has explored how our urban and suburban landscapes will be reclaimed by nature in just a few short years after the catastrophic reduction of the human population, and has taken inspiration from video games (think Enslaved and Last of Us) when vividly painting these scenes.

Defender has everything you want from a dystopia, including all the violence and gore you could ask for. There’s the mad survivors who have lost all sense of humanity –  out for just themselves and who will stop at nothing to get what they want – but there’s still those untouched by darkness (some much needed light!). This contrast is so essential, and sets the scene for our two protagonists – a stranger on a journey and the young girl he meets, selling lemonade by the side of the road.

The more I read Defender, the more I liked it, so it’s good news that this is the first of a four-book series!

TLDR: Brutal, captivating, unmissable – and probably the most depressing bit is the wait for book 2!