It’s Christmas again, already. Even after an interminable year of COVID, it’s come round fast. And if like me, you are ambivalent about Christmas and its origins, its tinsels and chimes, and you never know what to give, here’s a suggestion. Two suggestions actually, that come from the things that have kept me going over this weird, grim year.

It’s not that I don’t like giving gifts, I just don’t like having to give a whole lot of them all at once. Birthdays are different, and other celebrations when you can think about the person, the occasion, and give the gift for that particular time, that moment. That I enjoy. And the gifts I’ve been given over the years that stay with me – literally, or in memory – are those that combine the spirit of the giver, of the gift, and of the moment. A book, a spoon, a cup; but mostly books, and some of them live beside my desk and have for years, the giver, the gift, the words, all there together between the covers.

It’s not often that you can give the same thing, or things, to a whole lot of different people you know in a whole lot of different ways. Even with books, there is rarely one that you can give to them all. But this year, maybe there is. It is called The Gifts of Reading, and it came to me as a gift from Jennie Orchard, the curator of this wondrous collection of essays that really are a gift – in many and manifold ways. Let me name them, or name the names, to conjure up the nature of the gift. Max Porter and Michael Ondaatje, Chigozie Obioma and Roddy Doyle, Pico Iyer and Madeleine Thien. That should be enough to entice you, even convince you. All of them at their splendid best, their thoughts ranging (as the best essays do) over the many ways reading has come to them, travelled with them, taken them forward to places they could never have imagined, or have picked them up when they’ve stumbled. And if this sounds too serious for the proverbial grumpy old uncle, try Jan Morris on reporting from Everest as a young man, devising codes to get the news of Hillary and Tenzing through the press milling around at the bottom, back to London, a scoop for the Times, in time for the Coronation. It’s a hoot of an essay told with flair and that double vision of the woman who had once been that eager young man. She died, as you’ll know, on 20th November this year. RIP Jan Morris, the giver of such gifts, climber of more than mere mountains…

But first, when you pick up this book, I suggest you read Alice Pung’s essay about her mother who could not read, or Dina Nayeri’s essay about arriving in Oklahoma as a girl, granted asylum from Iran, and being given a library card. It was to help her learn English, which it did, but she was young, and learning English was the least of it. The real gift was the freedom to choose books – up to thirty at a time! – without having them vetted or approved or removed. A freedom she’d never known in Iran, or as a refugee in Italy, a freedom that set her on the path to becoming a writer, the craggy, jagged path each writer must walk if we are to receive the gift as we lie on our beds and read.

I’ve known The Gifts of Reading was coming for a year or more, a long journey in itself and not without its craggy moments – show me a book worth its cover that doesn’t have them. And I’ve known that the essays were being donated pro bono, along with the hard work of the curating, as a gift from all the contributors to Room to Read, the literacy not-for-profit founded by John Wood, once of Microsoft. There’s an essay by him about that journey, from small beginnings to the libraries and literacy programmes that are now at work in low-income communities in south-east Asia and Africa. Pitched for primary school children, and for girls in secondary schools – which is when too many girls drop out – Room to Read has facilitated (among much else) the making of more than 1600 books in 42 languages, and have distributed 28 million copies.

I’m not suggesting you buy this book as a do-good gesture, or simply because you’ve had the good fortune to grow up taking reading the ability to read for granted. If the work of Room to Read moves you, you can always make a donation. The pleasure of The Gifts of Reading is in the reading, and the rest is an additional gift, a gift within the gift.

And here it is, The Gifts of Reading, a book that keeps on giving, propped up amid the plants that live on the windowsill in the room where I have read my way through this difficult year. 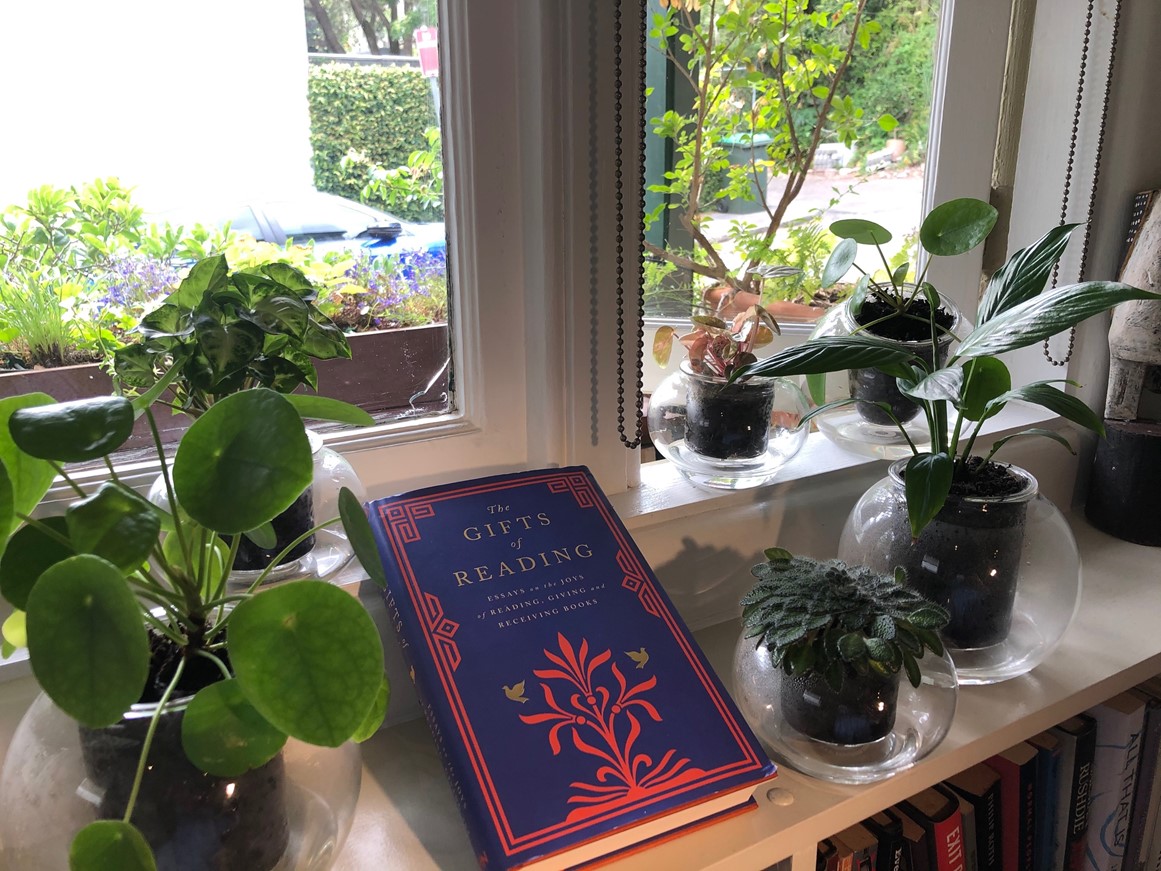 And before I finish, let me tell you about the clever glass bowls the plants are in, for they are the other thing that has kept me going this year. I found them in a local garden shop just before lockdown began, and they have been an expected joy, welcoming the sun each morning. The water in the round bowl is sucked up through a wick into the container where the soil is; it seems to be the perfect environment for them, and all you have to do is keep an eye on the water level. By the time we were allowed back to the shops, I had to upgrade to the next size bowl, they were all doing so well. And that is my other suggestion for this year’s tinsel season, another gift that keeps on giving.

The Gifts of Reading is out now!

Want to learn more about this delightful anthology? Harry Hartog Bookseller recently held an event with Jennie Orchard, the editor of The Gifts of Reading, alongside Max Porter, Roddy Doyle and Sisonke Msimang as well as Room to Read founder John Wood and moderator Susan Wyndham. Watch the event video below.

Dr Norman Swan to publish his second book, SO YOU WANT TO LIVE YOUNGER LONGER?, with Hachette Australia

Find the perfect story for mum this Mother's Day

Mother’s Day is right around the corner... If you’re searching for the perfect gift, we’ve got just the list for you.

Books for the New You

Yearning for change? With summer here and a brand-new year almost upon us, now is the perfect time to take stock and work out what you want in life.