Street Smart: The Rise of Cities and the Fall of Cars

A leading transportation expert and former NY Traffic Commissioner explores how cars have shaped American cities, explains why more Americans are relying less on driving, and details exactly how our urban centres will need to adapt.

On a Saturday morning in December 1973, a section of New York's West Side Highway collapsed under the weight of a truck full of asphalt. The road was closed, seemingly for good, and the 80,000 cars that traveled it each day had to find a new way to their destinations. It ought to have produced traffic chaos, but it didn't. The cars simply vanished. It was a moment of revelation: the highway had induced the demand for car travel. It was a classic case of build it and they will come," but for the first time the opposite had been shown to be true: knock it down and they will go away. Samuel I. Schwartz was inspired by the lesson. He started to reimagine cities, most of all his beloved New York, freed from their obligation to cars. Eventually, he found, he was not alone.Since the turn of the twenty-first century, a surreptitious revolution has taken place: every year Americans are driving fewer miles. And the generation named for this new century,the Millennials,are driving least of all. Not because they can't afford to they don't want to. They have better ideas for how to use their streets. An urban transformation is underway, and smart streets are at the heart of it. They will boost property prices and personal fitness, roll back years of congestion and smog, and offer a transformative experience of American urban life. From San Francisco to Salt Lake, Charleston to Houston, the American city is becoming a better and better place to be. Schwartz's Street Smart is a dazzling and affectionate history of the struggle for control of American cities, and an inspiring off-road map to a more vibrant, active, and vigorous urban future. 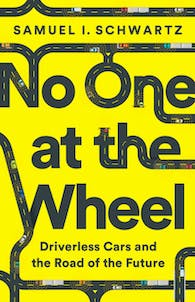 No One at the Wheel: Driverless Cars and the Road of the Future