Come Back in September: A Literary Education on West Sixty-Seventh Street, Manhattan

Critic and writer Darryl Pinckney recalls his friendship and apprenticeship with Elizabeth Hardwick and Barbara Epstein and the introduction they offered him to the New York literary world.

At the start of the 1970s, Darryl Pinckney arrived in New York City and at Columbia University and enrolled in Elizabeth Hardwick's writing class at Barnard. After he graduated, he was welcomed into her home as a friend and mentee, and he became close with Hardwick and her best friend, neighbor, and fellow founder of The New York Review of Books, Barbara Epstein. Pinckney found himself at the heart of the New York literary world. He was surrounded by the great writers of the time, like Susan Sontag, Robert Lowell, and Mary McCarthy, as well as the overlapping cultural revolutions and communities that swept New York: the New Wave in film, rock, and writing; the art of Felice Rosser, Jean-Michel Basquiat, Lucy Sante, Howard Brookner, and Nan Goldin; the influence of feminism on American culture and literature; the black arts movement confronted by black feminism; and New Negro veterans experiencing the return of their youth as history. Pinckney filtered the avant-garde life he was exposed to downtown and the radical intellectual tradition of The Review through the moral values he inherited and adapted from abolitionist and Reconstruction black culture.

In Come Back in September, Pinckney recalls his introduction to New York and the writing life. The critic and novelist intimately captures this revolutionary, brilliant, and troubled period in American letters. Elizabeth Hardwick was not only the link to the intellectual heart of New York, but also a source of continual support and inspiration-the way she worked, her artistry, and the beauty of her voice. Through his memories of the city and of Hardwick, we see the emergence and evolution of Pinckney himself: as a young man, as a New Yorker, and as one of the essential intellectuals of our time. 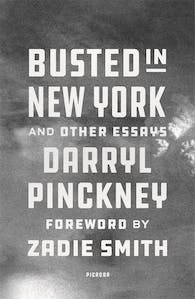 Busted in New York & Other Essays: with an introduction by Zadie Smith

Praise for Come Back in September: A Literary Education on West Sixty-Seventh Street, Manhattan