All About Book Launches

Book launches can be a funny thing – a nerve-wracking, scary, funny thing. And that’s not even starting on how it feels to be an author at the launch of your own book.

Will anyone show up?

Will your mum get drunk and make an embarrassing speech (again)?

Coming from outside of the publishing industry and not having experience of attending book launches before my first novel, Who’s Afraid?, was published in January 2016 I wasn’t really sure how things were done. I’m not very good at ‘faking it’, so instead of trying to ‘making it’ I figured I’d just do something cool instead – something that I would want to come along to if I hadn’t written the book.

That ‘something cool’ was called ‘The Art Of Who’s Afraid?’ and it was an exhibition featuring 22 artists from all around the world who interpreted the characters, the story and the scenes from the novel into their chosen form of art. Launching at Kinokuniya Sydney and running over the course of two weeks, the exhibition was extra special to me because:

b) it was a direct wink to what happens in the book. The main character, Tommi Grayson, is a junior art curator at McManus Galleries in Dundee, Scotland. She’s also a werewolf, but it’s much harder to organise werewolves for a book launch than they would have you believe.

So nearly one year on, I’m getting ready to launch my second book, the direct sequel called Who’s Afraid Too? – and I got to thinking: what would be the ‘something cool’ that I could hustle up? Music has always been a huge part of the novels and it makes up a huge part of who the characters are. With the second book being set largely in Berlin - one of the best live music cities in the world - at a nightclub called Phases run by werewolves, it seemed like a no-brainer to try and combine the two.

During the UK Who’s Afraid? book tour in 2016, we tried something similar at the Manchester Waterstones with indie rock band Fairchild. Tommi is a big fan of in the book, and wears one of their band shirts in a scene towards the end of Who’s Afraid? It was incredibly rad seeing a band you love – and which your characters love – perform a live, acoustic set in a bookstore to a packed room of book and music aficionados, especially when you’ve imagined those same songs as the soundtrack to the story you’ve written.

It made sense to expand that idea a little bit for the launch of Who’s Afraid Too? which – more than any other book in the series – has music form an essential part of the story’s DNA. Fortunately, I was able to recruit two bands who truly capture the energy and tone of the second book – Sydney musos 7 Evil Exes and headliners Moof de Vah.

The thing they rarely tell you about writing a book is although you perform the physical act of writing it yourself, there are a lot of people – A LOT – who help it come into being. Friends, family and fellow creatives who, frankly, deserve as much of a moment as the person/s who wrote the dang book so that too became a really essential part of what the Who’s Afraid Too? launch could be. Sure, it’s about celebrating the release of the book and those who care that it exists, but it’s also about saying a big thank you to those who helped make it possible. These people will be at the launch too, with booths and stalls spruiking everything from crafts they’ve lovingly handmade out of the pages of comic books to an actual freakin werewolf photo booth! Hopefully, the key idea is realised and that is, simply, to have the people who come along and leave feel like they had a fun night and got to see ‘something cool’… something a little bit like Who’s Afraid Too? in real life.

You can come along to the Who’s Afraid Too? book launch happening on Friday, January 20 from 6pm to 9pm at Erskineville Town Hall, Sydney. You can register for a free ticket at EventBrite! 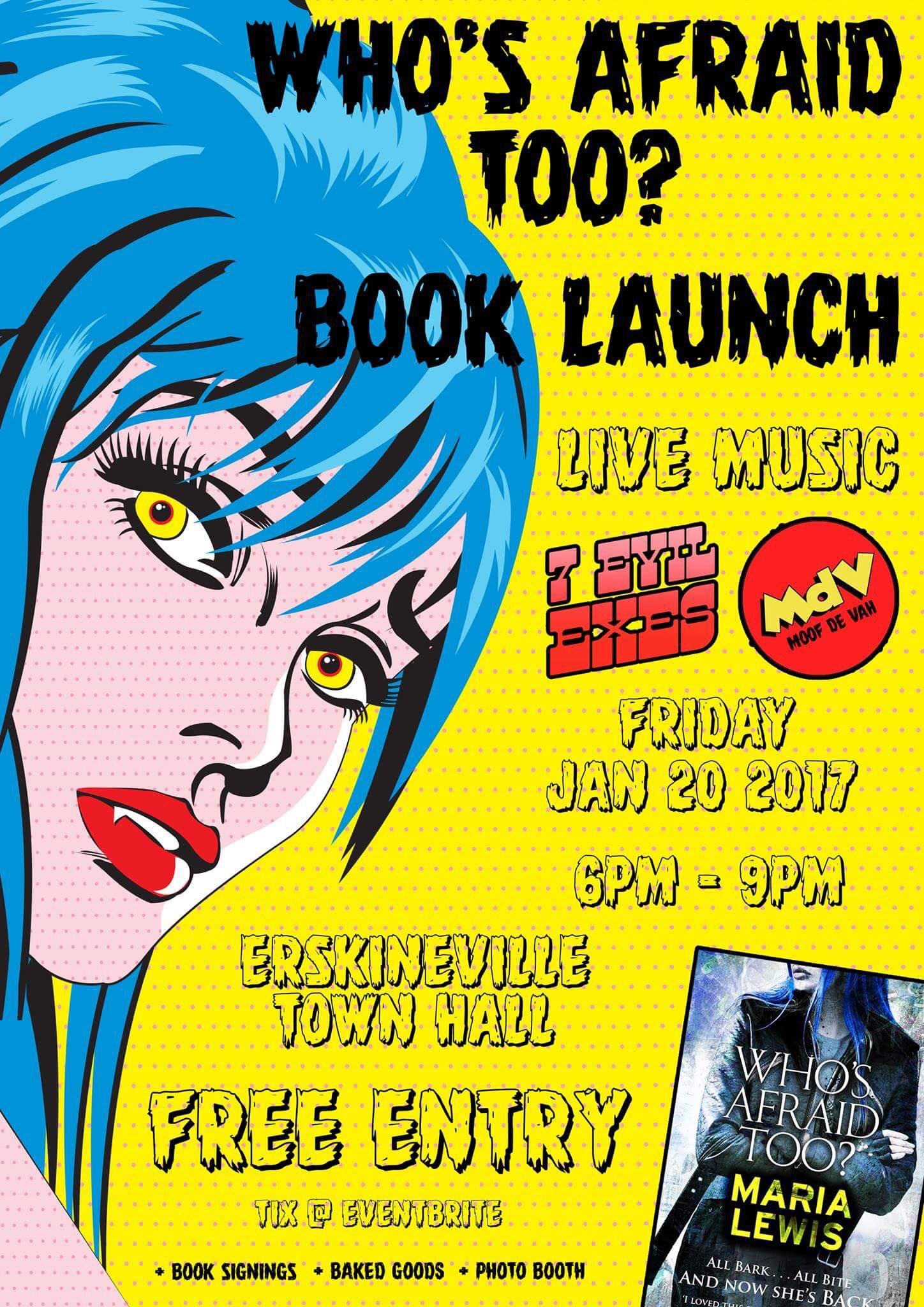 Maria Lewis, a journalist of 12 years standing, is the author of Who’s Afraid, Too? out January 2017. A wannabe werewolf, she works at SBS on The Feed by day and writes by night. Drop in and chat to her on Facebook (https://www.facebook.com/marialewiswriter) or Twitter.