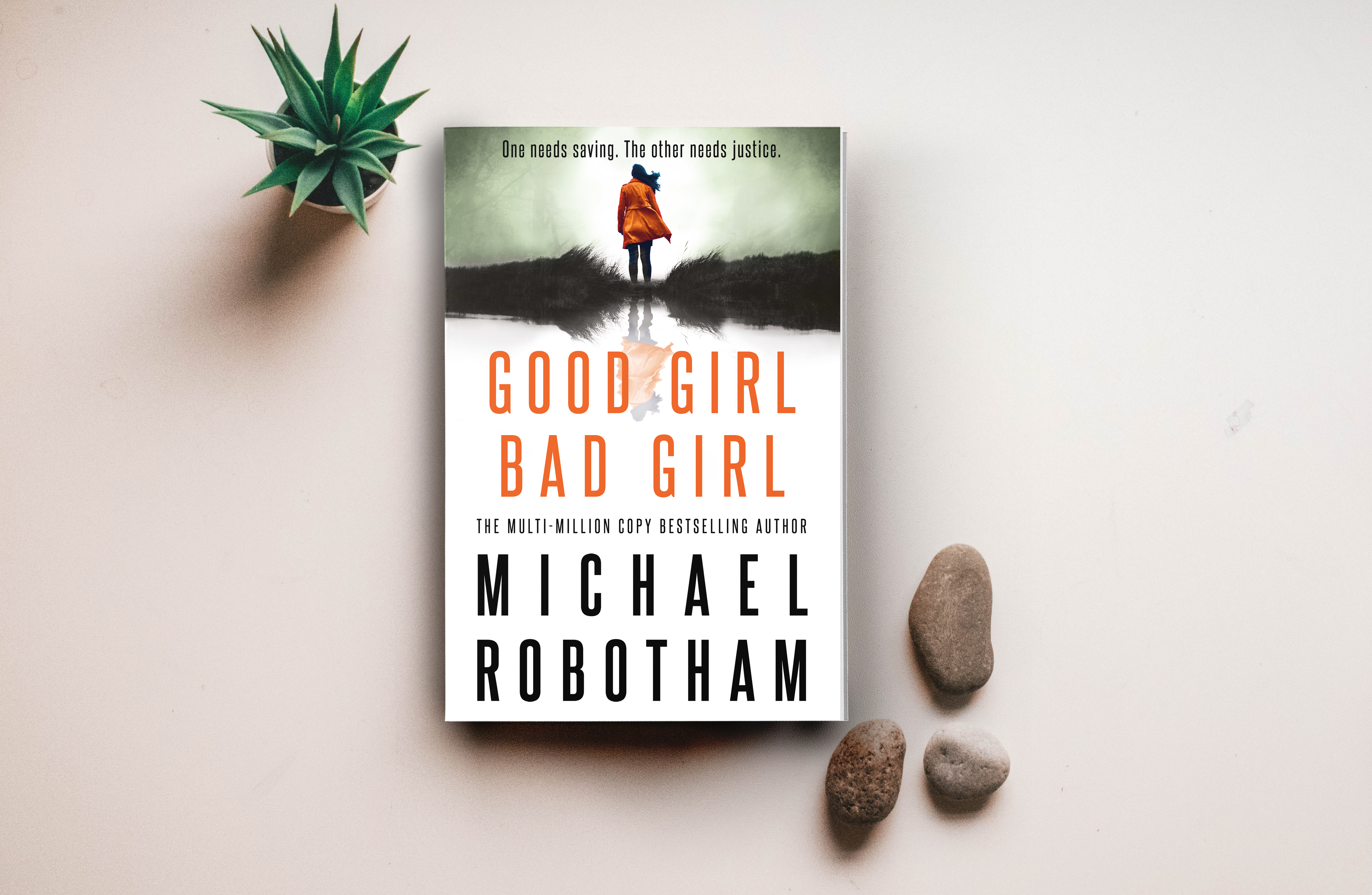 ‘Which one is she?’ I ask, leaning closer to the observation window.

‘Blonde. Baggy sweater. Sitting on her own.’ ‘And you’re not going to tell me why I’m here?’ ‘I don’t want to influence your decision.’

I look again at the group of teenagers, girls and boys. Most are wearing jeans and long tops with the sleeves pulled down to hide whatever self-inflicted damage has been done. Some are cutters, some are burners, or scratchers, or bulimics, or anorexics, or obsessive-compulsives, or pyromaniacs, or sociopaths, or narcissists, or suffering from ADHD. Some abuse food or drugs, others swallow foreign objects, or run into walls on purpose, or take outrageous risks.

Evie Cormac has her knees drawn up, almost as though she doesn’t trust the floor. Sullen mouthed and pretty, she could be eighteen or she could be fourteen. Not quite a woman or a girl about to bid goodbye to childhood, yet there is something ageless and changeless about her, as if she has seen the worst and survived it. With brown eyes framed by thickened eyelashes and bleached hair cut in a ragged bob, she’s holding the sleeves of her sweater in her bunched fists, stretching the neckline, revealing a pattern of red blotches below her jawline that could be love-bites or fingermarks.

Adam Guthrie is standing alongside me, regarding Evie like she is the latest arrival at Twycross Zoo.

‘Her current index office is for aggravated assault. She broke someone’s jaw with a half-brick.’

‘Too few to mention.’

He’s attempting to be funny or deliberately obtuse. We’re at Langford Hall, a secure children’s home in Nottingham, where Guthrie is a resident social worker. He’s dressed in baggy jeans, combat boots and a rugby jumper, trying too hard to look like ‘one of them’; someone who can relate to teenage delinquency and strife rather than an underpaid, low-level public servant with a wife, a mortgage and two kids. He and I were at university together and lived in the same college. I wouldn’t say we were friends, more like passing acquaintances, although I went to his wedding a few years ago and slept with one of the bridesmaids. I didn’t know she was Guthrie’s youngest sister. Would it have made a difference? I’m not sure. He hasn’t held it against me.

We enter the room and take two chairs, joining the circle or teenagers, who watch us with a mixture of suspicion and boredom.

‘We have a visitor today,’ says Guthrie.‘This is Cyrus Haven.’ ‘Who is he?’ asks one of the girls.

‘I’m a psychologist,’ I reply.

‘Another one!’ says the same girl, screwing up her face. ‘Cyrus is here to observe.’

I look for Evie’s reaction. She’s watching me blankly.

Guthrie crosses his legs, revealing a hairless pale ankle where his trouser cuff has ridden up his shin. He’s a jolly, fat sort of bloke who rubs his hands together at the start of something, presupposing the fun that awaits.

‘Let’s begin with some introductions, shall we? I want you to each tell Cyrus your name, where you’re from and why you’re here. Who wants to go first?’

She shakes her head. I’m sitting directly opposite Evie. She knows I’m looking at her.

‘That was a legitimate protest,’ argues Holly, growing more animated.‘We were protesting against the outdated assumptions of class and gender inherent in this white-male dominated gulag.’

‘Thank you, comrade,’ says Guthrie sarcastically. ‘Will you get us started, Nathan?’

‘Don’t call me Nathan,’ says a beanpole of a boy with pimples on his forehead.

Guthrie takes a small knitted teddy bear from his pocket and tosses it to Nat. ‘You’re up first. Remember, whoever has the bear has the right to speak. Nobody else can interrupt.’

Nat bounces the teddy bear on his thigh.

‘I’m from Sheffield and I’m here cos I took a dump in my neighbour’s VW when he left it unlocked.’

Titters all round. Evie doesn’t join in. ‘Why did you do that?’ asks Guthrie.

Nat shrugs nonchalantly. ‘It were a laugh.’ ‘On the driver’s seat?’ asks Holly.

‘Yeah. Course. Where else? The dickhead complained to the police so me and my mates gave him a kicking.’

‘Do you feel bad about that?’ asks Guthrie. ‘Not really.’

‘He had to have metal plates put in his head.’

‘Yeah, but he had insurance and he got compensation. My ma had to pay a fine. Way I see it, the dickhead made money.’

Guthrie starts to argue but changes his mind, perhaps recognising the futility.

The teddy bear is passed on to Reebah from Nottingham, who is painfully thin and who sewed her lips together because her father tried to make her eat.

‘What did he make you eat?’ asks another of the girls, who is so fat that her thighs are forcing her knees apart.

Guthrie interrupts. ‘Please don’t make critical comments, Cordelia. You can only speak if you have the bear.’

‘Give it to me then,’ she says, snatching the bear from Reebah’s lap.

The girls wrestle for a moment until Guthrie intervenes, but Reebah has forgotten what she wanted to say.

The bear is in a new lap. ‘My name is Cordelia and I’m from Leeds and when someone pisses me off, I fight them, you know. I make ’em pay.’

‘What sort of things make you angry?’ ‘When people call me fat.’

‘Shut the fuck up!’ yells Cordelia, jumping to her feet. She’s twice Evie’s size. ‘Say that again and I’ll fuckin’ batter you.’

Guthrie has put himself between them. ‘Apologise, Evie.’ Evie smiles sweetly. ‘I’m sorry for calling you fat, Cordelia.

‘OK, let’s all settle down,’ says Guthrie. ‘Cordelia, why are you here?’

‘I grew up too soon,’ she replies. ‘I lost my virginity at, like, eleven. I slept with guys and slept with girls and smoked a lot of pot. I tried heroin at twelve and ice when I was thirteen.’

Cordelia glares at her. ‘My mum called the police on me, so I tried to poison her with floor cleaner.’

‘To punish her?’ asks Guthrie.

‘Maybe,’ says Cordelia.‘It was like an experiment, you know.

I wanted to, like, see what would happen.’ ‘Did it work?’ asks Nat.

‘Nah,’ replies Cordelia. ‘She said the soup tasted funny and didn’t finish the bowl. Made her vomit, that’s all.’

‘You should have used wolfsbane,’ says Nat. ‘What’s that?’

‘It’s a plant. I heard about this gardener who died when he touched the leaves.’

‘My mum doesn’t like gardening,’ says Cordelia, missing the point.

Guthrie passes the teddy bear to Evie. ‘Your turn.’ ‘Nope.’

‘The details of my life are inconsequential.’ ‘That’s not true.’

Evie sighs and leans forward, resting her forearms on her knees, squeezing the bear with both hands. Her accent changes. ‘My father was a relentlessly self-improving boulangerie owner from Belgium with low-grade narcolepsy and a penchant for buggery. My mother was a fifteen-year-old French prostitute

named Chloe with webbed feet . . .’ I laugh. Everybody looks at me. ‘It’s from Austin Powers,’ I explain. More blank stares.

Where’s your shitter? I’ve got a turtle-head poking out.’ ‘Fat Bastard,’ I say.

Evie smiles. Guthrie is annoyed with me, as though I’m fomenting unrest.

He calls on another teenager, who has a blue streak in her hair and piercings in her ears, eyebrows and nose.

Serena recounts an episode from her life when she went to America as an exchange student at sixteen and lived with a family in Ohio, whose son was in prison for murder. Every fortnight they insisted Serena visit him, making her wear her sexiest clothes. Short dresses. Low-cut tops.

‘He was on the other side of the glass and his father kept telling me to lean closer and show him my tits.’

Evie sneezes into the crook of her arm in a short, sharp exhalation, that sounds a lot like, ‘Bullshit!’

Serena glares at her but goes on with her story. ‘One night, when I was sleeping, the father came into my room and raped me. I was too frightened to tell my parents or call the police. I was alone in a foreign country, thousands of miles from home.’ She looks around the group, hoping for sympathy.

‘Back home, I started having problems – drinking and cutting myself. My parents sent me to see to a therapist, who seemed really nice at the beginning until he tried to rape me.’

‘We’re not here to pass judgement,’ Guthrie warns her. ‘But she’s making shit up. What’s  the  point  of  sharing  if people are gonna tell lies.’

Serena leaps to her feet. ‘You’re a freak! Everybody knows it.’ ‘Please sit down,’ says Guthrie, trying to keep the girls apart. ‘She called me a fucking liar.’

Serena ducks under Guthrie’s arm and launches herself across the space, knocking Evie off her chair. The two of them are wrestling on the floor, but Evie seems to be laughing as she wards off the blows.

An alarm has been raised and a security team bursts into the group therapy room, dragging Serena away. The rest of the teenagers are ordered back to their bedrooms, all except for Evie. Dusting herself off, she touches the corner of her lip, rubbing a smudge of blood between her thumb and forefinger.

I give her a tissue. ‘Are you all right?’ ‘I’m fine. She punches like a girl.’ ‘What happened to your neck?’ ‘Someone tried to strangle me.’

‘I have that sort of face.’

I pull up a chair and motion for Evie to sit down. She complies, crossing her legs, revealing an electronic tag on her ankle.‘Why are you wearing that?’ ‘They think I’m trying to escape.’ ‘Are you?’

Evie raises her forefinger to her lips and makes a shushing sound.

‘First chance I get.’

Michael Robotham has triumphed at this year’s Crime Writers’ Association Awards, receiving the prestigious and internationally recognised Gold Dagger for best crime novel of the year for his bestselling Good Girl, Bad Girl.

Father's Day is around the corner and we're here to help you sort through all the bookish choices on offer. Here are 8 stories every Dad can enjoy.

Read an extract from The Rip, the acclaimed new novel from the award-winning author of Wimmera, Mark Brandi.