How to create your own Garden of Small Beginnings

Inspired by The Garden of Small Beginnings, I picked up my grandmother (an obsessive gardener who believes gardening heals the soul) and headed to Bunnings to create my own garden. Not just any garden, a fairy garden.

Why do you ask? Let’s start from the beginning.

The Garden of Small Beginnings, focuses on Lili, whose husband tragically dies in a terrible car accident outside their family home. Three years after his death, Lili is coping and has managed to resume her day-to-day life as a mother of two and successful textbook illustrator. Despite trying to be strong for her girls, Lili feels an aching loss inside her.

When she is commissioned to illustrate a series of horticultural books – something she knows little about- Lili is forced to take a gardening class. Little did she know that through this class, her own soul will begin to heal and the wilted roots of her life will finally start to blossom.

Obviously, The Garden of Small Beginnings is not just about gardening. It focuses on friendship and of course for you hearties, love! However, gardening is a huge part and that inspired me to create my own garden. That was until I remembered I lived in a small, inner city, balcony-less apartment. I told Grandma of my short-lived dream and she suggested a fairy garden in a pot plant. Ingenious!

With Grandma in tow, we picked up the necessary items, made some tea and created a mini garden together and speaking from a person with little gardening experience, it was easy and so much fun!

•    Potting mix
•    Plants/flowers (This is entirely your choice. I picked a fern, Compact Cuphea, Blue Star Creeper, some ground cover to fill in the gaps and some pretty pansys. This would be great with succulents as well and they require minimal attention)
•    A pot (This can be whatever size you want for your fairy garden. I used a medium sized pot)
•    Pebbles/gemstones
•    Fairy garden decorations (I found mine at a market stall but there are millions of sites online you can order from. I recommend https://gardensparkle.com.au/)
•    Gardening tools (spade, gloves)
•    Towel and glasses/goggles (You will see why!)

Part one: Breaking the pot 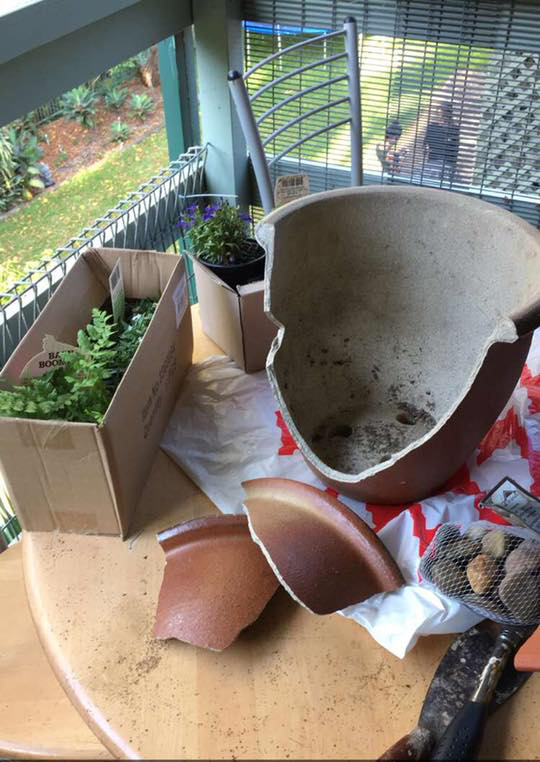 This to me was the hardest part of the whole process. Place down an old towel and lay your pot on its side. Put on some glasses/goggles to protect your eyes. Cover the side you want to break with another towel (to keep the shards to a minimum) and using a hammer, knock out the entire side of your pot with little taps. The broken parts of the pot will be used as separators in your garden so don’t distress if it breaks multiple times.
Once this is done, organise how you would like your fairy garden sections to look. I had two big broken pieces so I decided to do two levels. This is entirely your creative process so play around! 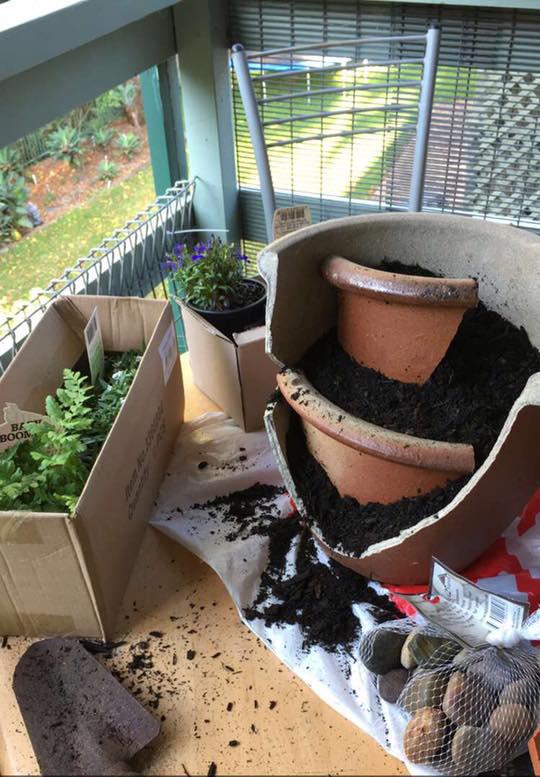 Once you have an idea of how you would like your fairy garden to be, start to layer your potting mix to hold your pot pieces in place. As I was using two levels, I used a small pot upside down and covered it with potting mix to help build my height and lean the two pieces on. Make sure your potting mix is deep enough to plant your roots in. 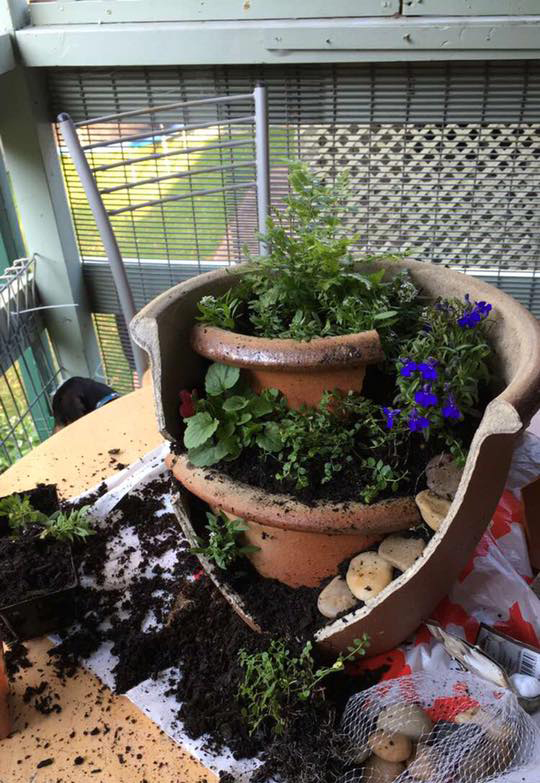 Using your layout, work out the position you would like your plants to go. I put the fern up the top as it was the biggest plant, then the flowers on the second level. I changed my mind and moved plants a few tries before I was happy, so don’t worry if it doesn’t look how you want it to the first time! 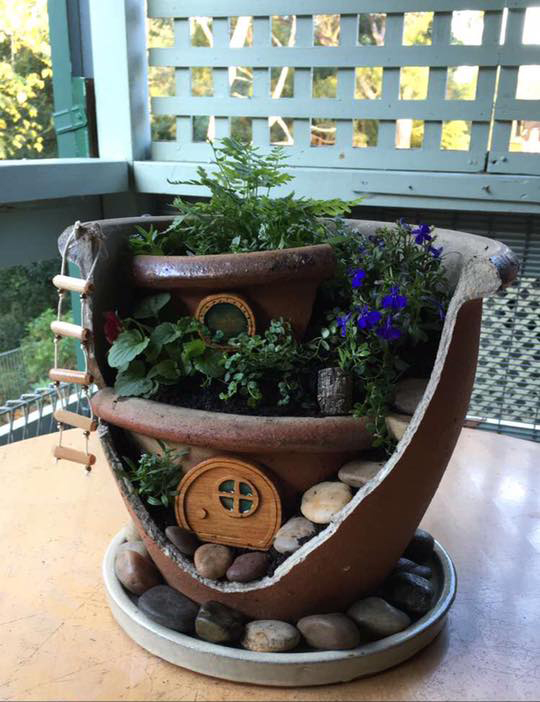 Now the fun part! I got my decorations from a gorgeous handmade market but you can buy this anywhere online and most gardening stores have figures you can use. I used my pebbles as stepping stones and created a walkway before using my decorations to make a mini house. No fairy garden is the same so use your imagination.

Once you have completed your decorations, give it some water and you have your own garden of small beginnings! You would not believe the compliments I get for my fairy garden and it’s a great activity to do with friends, children or grandchildren.

I proudly have mine sitting on my bookshelf next to the window but there are no limits! If you want to make a tiny one for your kitchen windowsill, try the teacup fairy garden or if you’d like to make one that grows herbs too, try the kitchen herb fairy garden. For a bedroom? Why stop at a pot plant! You can use any container you want. The options with this fun DIY gardening project are limitless.

What are you waiting for? Time to create your own Garden of Small Beginnings!

THE GARDEN OF SMALL BEGINNINGS by Abbi Waxman is OUT NOW

Publicist at Hachette Australia and mother of a miniature dachshund named after Henry VIII. I love reading romance as much as I love drinking wine. Never put a gun to my head and make me choose between them.

This Valentine's Day, let the Books With Heart team give you the ultimate gift: hot celebrities and delicious books. You're welcome.

Kayte Nunn tells us about her inspiration, research and the writing routine behind her newest book.

Get a sneak peek at the new Esther Campion romance with our review. (Plus learn how to join our book club)