How good was episode one of American Gods?! The blood! The gore! The soundtrack! The dream sequences!

We may have struggled to contain ourselves a little. But we’ve been waiting for this for so long now, and it was just so good. Being book nerds, we’re naturally very attached to the original so we wanted to take a weekly look at how the TV series rates against the book.

Straight up, the opening scene was different as we start with the first Vikings to reach the New World (adapted from a vignette that appears at the end of Chapter 3 in the book), which soon descends into some Tarantino-worthy stylised violence as they realise they need a satisfactory war sacrifice for the All Father. Special effects (which were fantastic) aside, it instantly gives us a sense of scope and place and sets up the premise of the series to come: 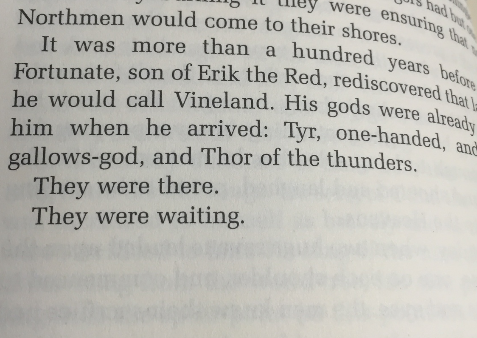 Bookending the episode with violence only reinforces that the God of War is already here, he’s been waiting and he’s ready to bring the storm.

The soundtrack is also a masterpiece, filled with claustrophobic, clashing and cloying notes. ‘In the Pines’, composed just for American Gods, was the perfect accompaniment to Laura’s funeral. Sweet, certainly, but almost sickly, hinting at future events to come.

Ian McShane’s Wednesday moved from forgetful old man to conniving con man in the space of a moment, and really captured his mercurial quality, while Ricky Whittle nailed his portrayal of Shadow with his ability to convey realms of feeling with the slightest twitch of a facial muscle. Fans of the book might have been missing Shadow’s pithy internal monologue, but Whittle’s portrayal of a man adrift was satisfyingly accessible to viewers new to the world.

We could keep talking about this for hours (could? We already have!), but before we go, we just have to mention those dream sequences. Brian Fuller’s set dressing is incredible, the lurid aesthetic only heightens the disorientation of the viewer; we are as confused and amazed as Shadow himself.

American Gods has definitely started with panache (that vaping, though) and since that was just the first two chapters, we can’t wait to see where it takes us next!