This week’s episode starts with a slight departure to previous episodes: a “somewhere in America” instead of a “coming to America.” I was on the edge of my seat as Mrs. Fadil teetered on her tipping and wobbly stool, reaching into the kitchen cabinet. The relief was palpable as she climbed down without incident, only to be shattered upon the realisation that Anubis had arrived to weigh her heart.

It’s a different introduction to Anubis, or Mr Jacquel as we first met him in the book, but I suspect we’ll be seeing more of him very soon. 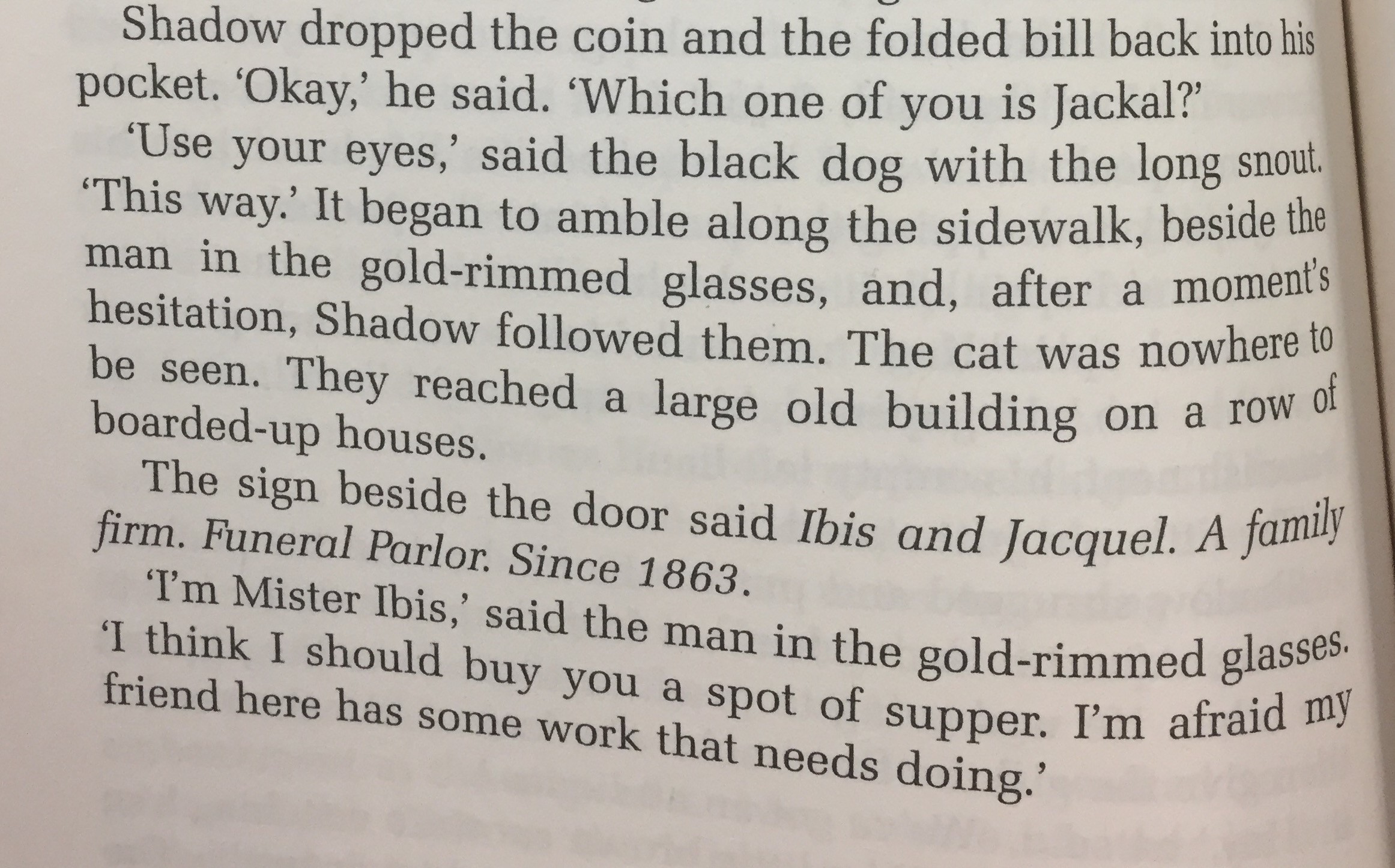 This scene did, however, exemplify the strength of this episode – humanity. Mrs Fadil reaches out to smooth the line of her apron atop her body prone on the kitchen floor. This small touch hits harder than some of the violent deaths we’ve seen before – this one feels more real.

Now that the series has established the world and the scope of events going on, they’ve allowed themselves a quieter and more focused episode. Where Shadow and Czernobog’s first game was well-lit, dramatic and spectated upon – this one (as with this episode) had no such pomp and circumstance. It happened quietly in the night. And here we get to meet Zorya Polunochnaya at last. This scene was one that we felt didn’t quite live up to the book: the midnight sister of the book is pale, ethereal and poised – she is young but is wise and calm – whereas the Zorya Polunochnaya of the screen was a somewhat guileless young woman more grounded in the physical world – a virgin, she proclaims, and demands a kiss in a complete reversal of her demure nature.

The choice to make her so provocative was confusing. Yes, in the text, she’s alluring, but this is based on Shadow’s projections on to her, and the way he sees her. Here, she’s been made to be actively seductive and it slightly galls to see her changed so significantly for no clear reason.

And then we come to one of the most talked-about scenes of the entire episode: the Jinn and Salim. The emotional element of this scene was the absolute stand-out. Again it was the simple, quiet gesture that struck the hardest – Salim reaches across the taxi and places a comforting hand on the Jinn’s shoulder. It said: I understand, me too. This moment was very beautiful. And then we are pulled from what was ultimately a truly human experience into full-on special effects, which we feel let the scene down. And...well... the Jinn’s eyes did look a bit like a Snapchat filter. We wanted more intensity and yet more subtlety in those eyes, a deep smouldering, ember-like burn on the edge of the desert.

The moments between Wednesday and Shadow are always an entertaining and enjoyable part of the episodes. They have fantastic chemistry together, as Wednesday twists and turns against Shadow’s questions, constantly sidestepping and swerving around anything unusual Shadow has noticed. His artful turns as a conman are also an excellent reminder of Wednesday’s skills in manipulation.

It was always going to be tough to fully show Shadow’s snow process, and this is one aspect where the book will always have the upper hand, as we get to see how Shadow pictures the snow, and how vividly he calls it up in his mind – whereas the slightly cheesy transition from marshmallow to snowy-sky didn’t quite hit the mark for us.

In this episode the book slightly had the edge over the show, but there will always be limitations as to what can be shown on screen. If we continue according to the books, we should see the return of Mr Nancy next week, and we can’t wait to see more of him!