I'm the Man: The Story of That Guy from Anthrax

The autobiography of Scott Ian, guitarist and cofounder of the legendary thrash metal band Anthrax, with a foreword by Kirk Hammett

I'm the Man is the fast-paced, humorous, and revealing memoir from the man who cofounded Anthrax, the band that proved to the masses that brutality and fun didn't have to be mutually exclusive. Through various lineup shifts, label snafus, rock'n' roll mayhem, and unforeseen circumstances galore, Scott Ian has approached life and music with a smile, viewing the band with deadly seriousness while recognizing the ridiculousness of the entertainment industry. Always performing with abundant energy that revealed his passion for his craft, Ian has never let the gravity of being a rock star go to his shaven, goateed head. I'm the Man is a blistering hard rock memoir, one that is astonishing in its candour and deftly told by the man who's kept the institution of Anthrax alive for more than thirty years. 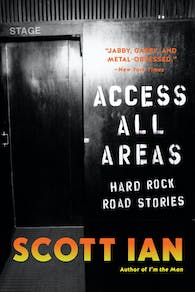 Access All Areas: Stories from a Hard Rock Life