Empire V: The Prince of Hamlet

EMPIRE V is a post-modern, timely, whimsical and satirical story about a young man who involuntary joins a revolutionary cult . . .

Roman thought he'd found the perfect opportunity to rebel. He may have been wrong.

He awakens strapped to a set of parallel bars in a richly appointed sitting room, and begins a conversation with a masked man which will change his life. His world has been a facade - one which the mysterious Brahma is about to tear away.

A stunning novel about the real world, and about the hidden channels of power behind the scenes, EMPIRE V is a post-modern satirical novel exploring the cults and corruption of politics, banking and power. And not only are these cults difficult to join - it turns out they may be impossible to leave . . . 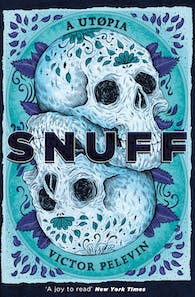 Praise for Empire V: The Prince of Hamlet