If you love wit, wisdom and waffles, Stephen King is your man. THURSDAY 06 APR, 2017

If you're a Stephen King fan your life has been a joy since December 7, 2013. That was the day that this little tweet broke the internet.

Stephen King arrived on twitter with an adorable vulnerability that you never know he had in him. Soon he followed with this tweet.

Aw, Stevie. So timid on the tweetbox.

But he soon got into the swing of it and has become twitter royalty. Like the time he delivered a savage burn to his son Joe Hill (a brilliantly talented bestselling author in his own right)

Or the time he reminded everyone that he made clowns creepy in the first place. And he kinda feels bad about it. He should, clowns are sooooo damn creepy...

He also offered up a description of Donald Trump that you will never be able to get out of your head... 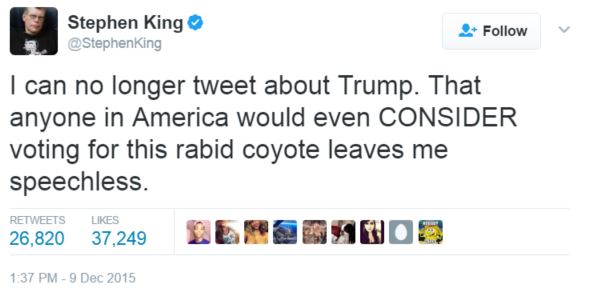 Or just the moments when he drops an intense wisdom bomb on you.

And every so often he releases nuggets of info about The Dark Tower movie, finally coming later this year!

And equally excited (but also terrified) that the IT remake is also on the way and looks AMAZING!

With Halloween just around the corner, inmates Tonile and Brigid look through the King of horror’s back catalogue and countdown his most terrifying tales.