A Sneak Peek at Midnight Sun

Can't wait to start reading the new Twilight book? Check out all the quotes that have been released from Stephenie Meyer's Midnight Sun! 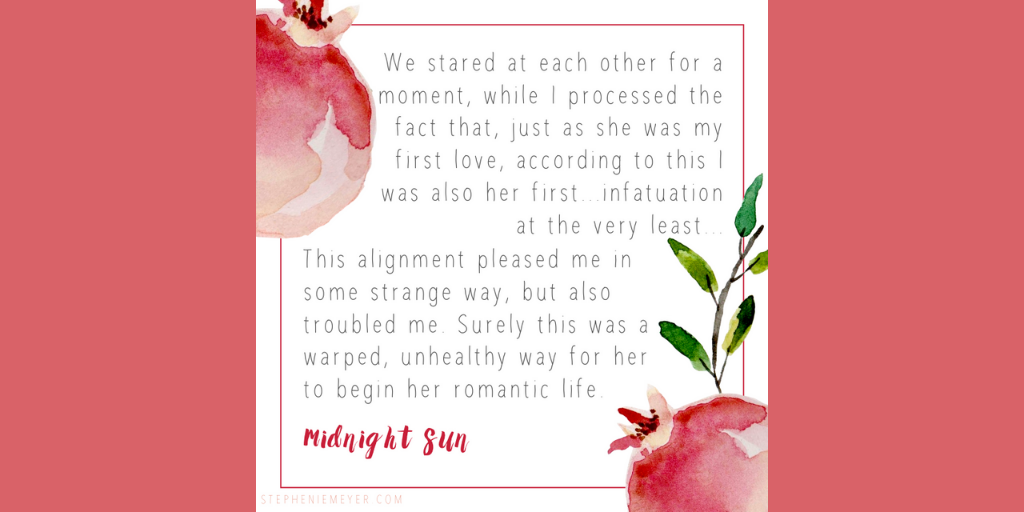 'We stared at each other for a moment, while I processed the fact that, just as she was my first love, according to this I was also her first... infatuation at the very least... This alignment pleased me in some strange way, but also troubled me. Surely this was a warped, unhealthy way for her to begin her romantic life.' 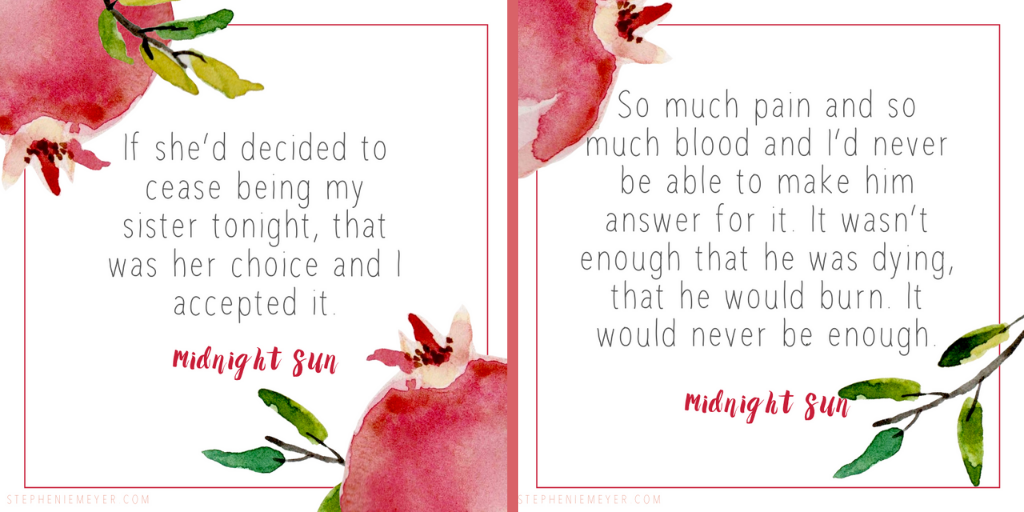 'If she'd decided to cease being my sister tonight, that was her choice and I accepted it.'

'So much pain and so much blood and I'd never be able to make him answer for it. It wasn't enough that he was dying, that he would burn. It would never be enough.'

'"Now we drive until the pavement ends.
"And what's there?" she asked, "at the pavement's end?"
An empty forest. A total lack of witnesses. A monster. "A trail."' 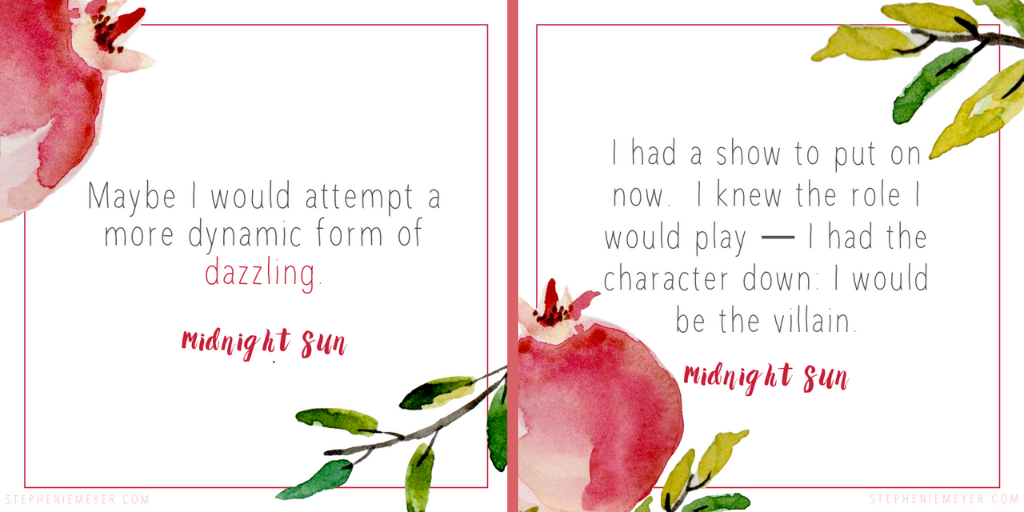 'Maybe I would attempt a more dynamic form of dazzling.'

'I had a show to put on now. I knew the role I would play - I had the character down. I would be the villain.' 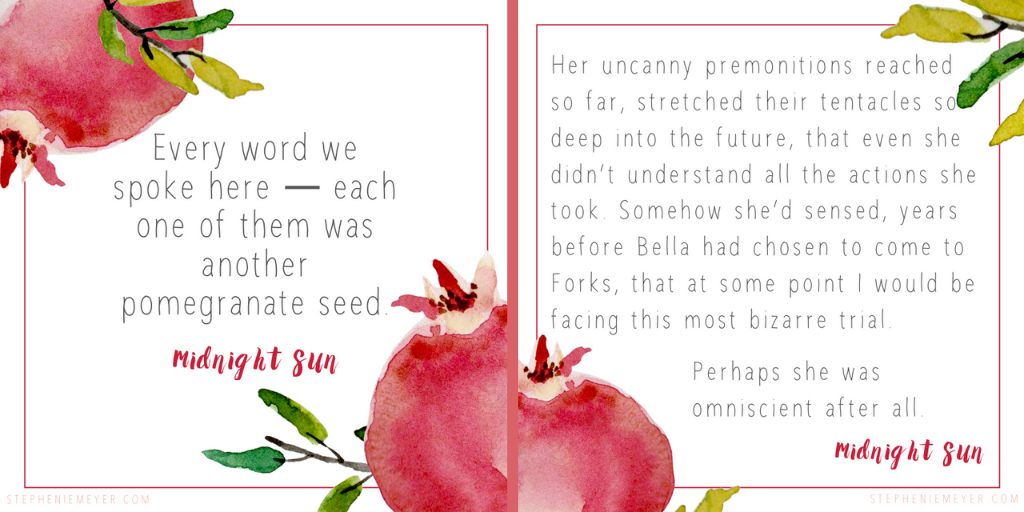 'Every word we spoke here - each one of them was another pomegranate seed.'

'Her uncanny premonitions reached so far, stretched their tentacles so deep into the future, that even she didn't understand all the actions she took. Somehow she'd sensed, years before Bella had chosen to come to Forks, that at some time I would be facing this mist bizarre trial. Perhaps she was omniscient after all.' 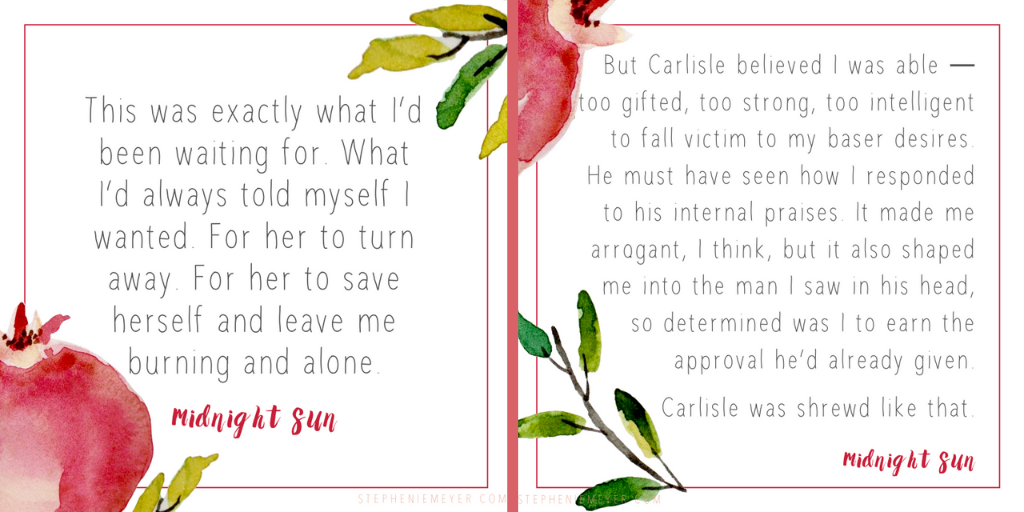 'This was exactly what I'd been waiting for. What I'd told myself I always wanted. For her to turn away. For her to save herself and leave me burning and alone.'

'But Carlisle believed I was able - too gifted, too strong, too intelligent to fall victim to my baser desires. He must have seen how I responded to his internal praises. It made me arrogant, I think, but it also shaped me into the man I saw in his head, so determined was I to earn the approval he'd already given. Carlisle was shrewd like that.' 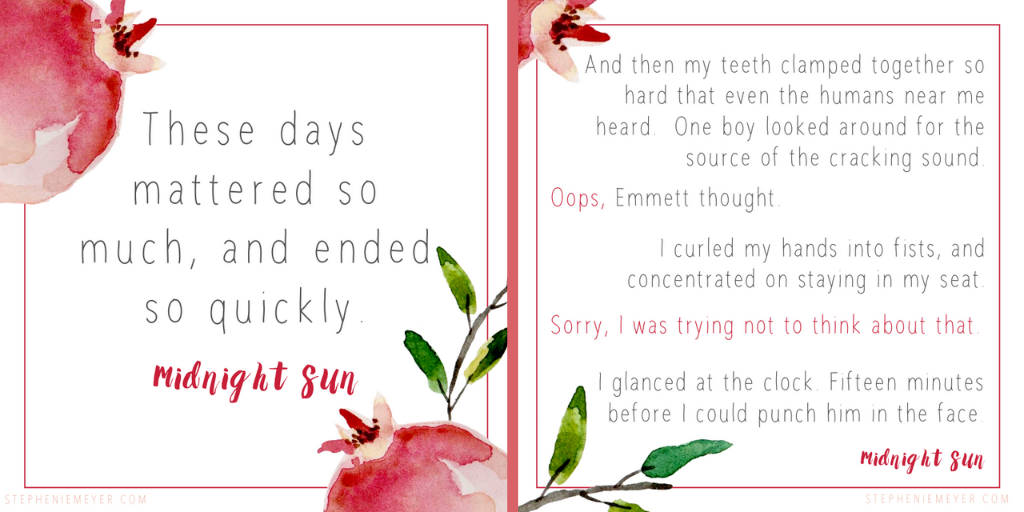 'These days mattered so much, and ended so quickly.'

'And then my teeth clamped together so hard that even the humans near me heard. One boy looked around for the source of the cracking sound. Oops, Emmett thought. I curled my hands into fists, and concentrated on staying in my seat. Sorry, I was trying not to think about that. I glanced at the clock. Fifteen minutes before I could punch him in the face.' 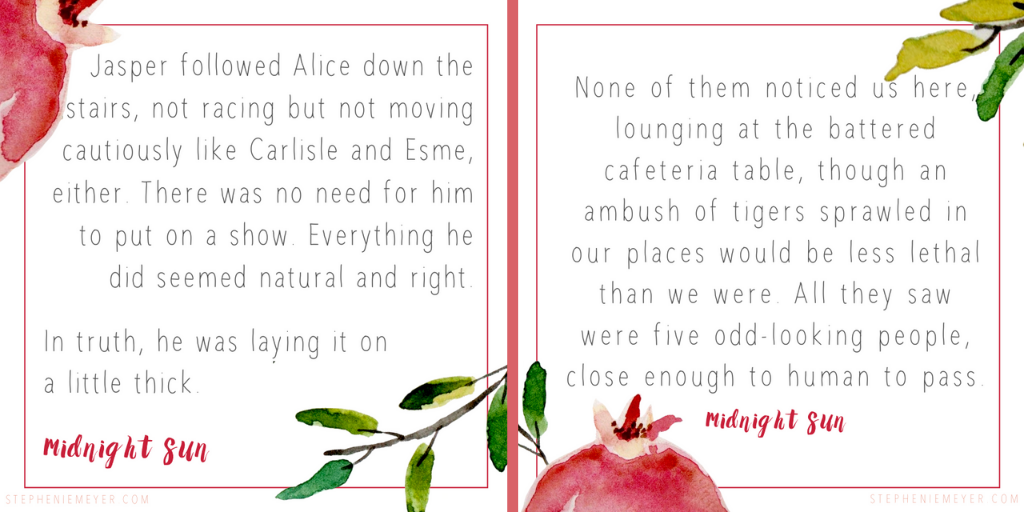 'Jasper followed Alice down the stairs, not reaching but not moving cautiously like Carlisle and Esme, either. There was no need to put on a show. Everything he did seemed natural and right. In truth, he was laying it on a little thick.'

'None of them noticed us here, lounging at the battered cafeteria table, though an ambush of tigers sprawled in our places would be less lethal than we were. All they saw were five odd-looking people, close enough to human to pass.'

'As much as I would have loved to get out of the truck and stalk up to the helpless duo - to lean over them, intimidating, close enough that all the little signs of what I was would feel like they were screaming at the old man, to bare my teeth and snarl a warning in a voice that would sound anything but human, to watch his hair stand on end and hear his heat sputter with panic - I knew it was a bad idea.'

'Could she think I was so sure of myself? Could she not guess how entirely out of my wheelhouse this all was? There were so many things I excelled at, most of them due to my extra-human abilities. I knew when I could be confident. This was not any of those times.' 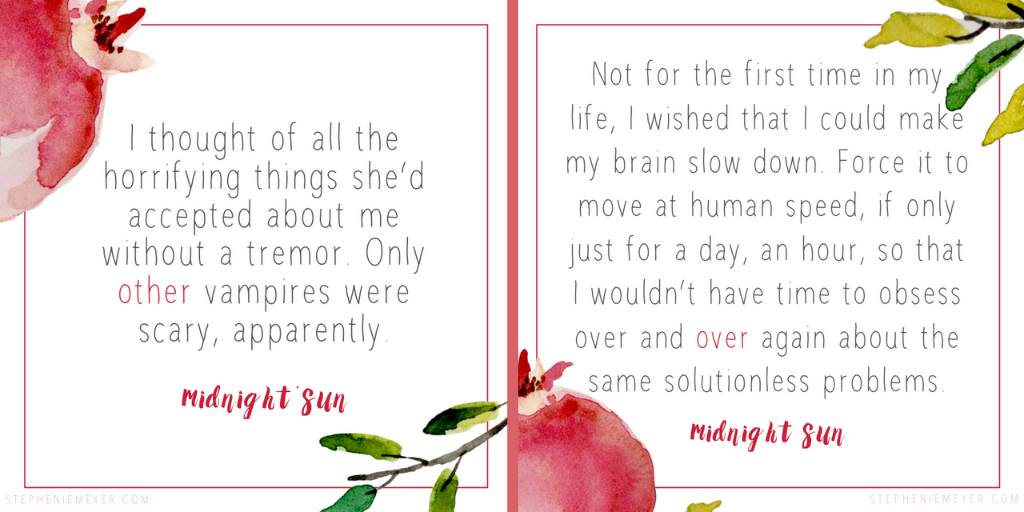 'I thought of all the horrifying things she'd accepted about me without a tremor. Only other vampires were scary, apparently.'

'Not for the first time in my life, I wished that I could make my brain slow down. Force it to move at human speed, if only just for a day, an hour, so that I wouldn't have time to obsess over and over again about the same solutionless problems.' 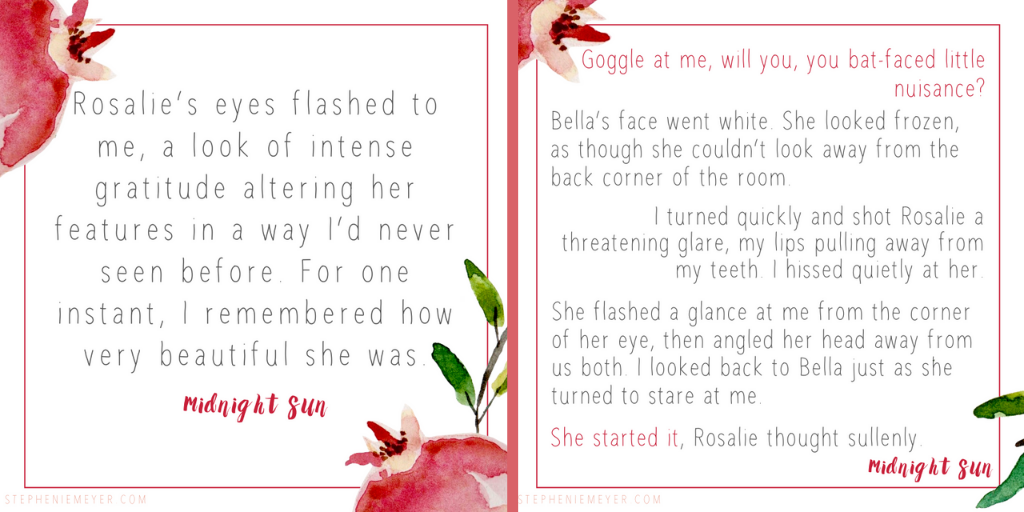 'Rosalie's eyes flashed to me, a look of intense gratitude altering her features in a way I'd never seen before. For one instance, I remembered how very beautiful she was.'

'Goggle at me, will you, you bat-faced nuisance? Bella's face went white. She looked frozen, as though she couldn't look away from the back corner of the room. I turned quickly and shot Rosalie a threatening glare, my lips pulling away from my teeth. I hissed quietly at her. She flashed a glance at me from the corner of her eye, then angled her head away from us both. I looked at Bella just as she turned to stare at me. She started it, Rosalie thought sullenly.' 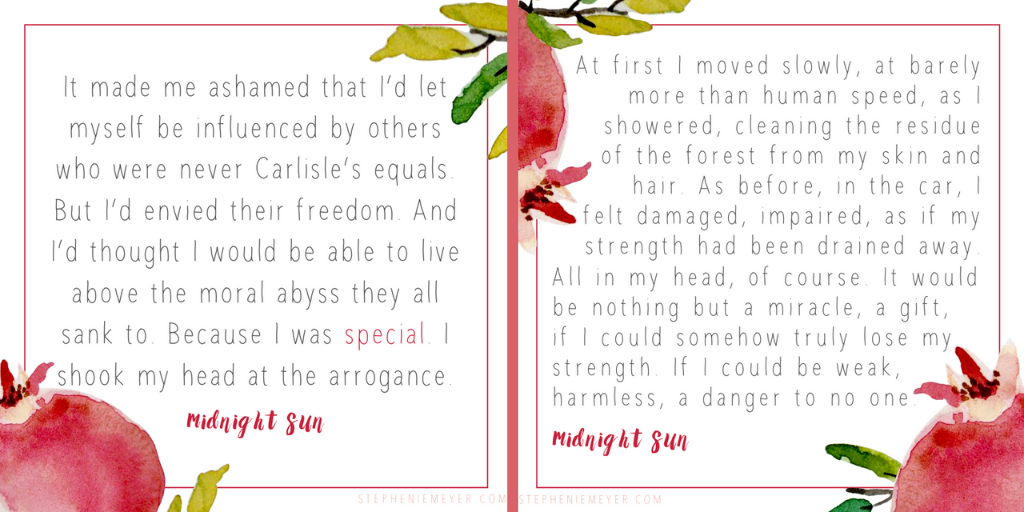 'It made me ashamed that I'd myself be influenced by others who were never Carlisle's equals. But I'd envied their freedom. And I'd thought I would be able to live above the moral abyss they all sank to. Because I was special. I shook my head at their arrogance.'

'At first I moved slowly, at barely more than human speed, as I showered, cleaning the residue of the forest from my skin and hair. As before, in the car, I felt damaged, impaired, as if my strength had been drained away. All in my head, of course. It would be nothing but a miracle, a gift, if I could somehow truly lose my strength. If I could be weak, harmless, a danger to no one.'

Midnight Sun by Stephenie Meyer is out Wednesday, 5 August.

Welcome back to Forks: A Midnight Sun Review

We couldn't resist the nostaglia of Midnight Sun, and you won't either!

If you could recast the iconic Twilight movies in 2020, who would you pick?

The Return of the Twilight Saga

It's official, Midnight Sun is coming.